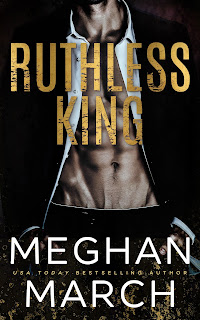 “You’re not going to die tonight, baby. I swear. Give that man what he doesn’t even know he wants—which is everything that’s you—and you’ll be just fine. Now, get going. Put that armor on and go slay yourself a dragon of a man.”

The first Meghan March book I'd ever read was Beneath This Mask in January 2015, and since then, I've read every single book she's released. She written both dark and light romances, but I'm going to be absolutely honest here--her Beneath series, which recently ended with Beneath These Truths in August of this year, remains my favorite. When I think of quintessential Meghan March, I think of her Beneath books. I'm not saying her other books weren't good reads; they were. But there was something extra-special about the series that launched her career. I wouldn't call it "perfect"--personally, there were books within the series that I liked more than others--but damn, March gave me the first set of anti-heroes I had ever fallen for. To me, an anti-hero is different from a tortured hero, and while I had come across a few of the latter, I hadn't met one of the former until this particular author made me aware there was such a thing. In between some of her Beneath releases, March has given her readers varied fictional fare, and she's done well, but I didn't realize how much I missed her anti-heroes until she introduced me to one mysterious man named Mount Lachlan in the final Beneath book. And Mount is the anti-hero that makes every other one that came before him seem like Prince Charming. He is the anti-hero personified.

At the request of the author for those who've read the book and are posting reviews, I'm going to keep this as spoiler-free as possible. All I can give you in terms of details is what's already been mentioned in the official synopsis for Ruthless King. Mount Lachlan is a man that is both feared and revered. He's earned the ire and respect of the people of New Orleans and there is nothing that goes on within his city that he isn't aware of. Keira Kilgore is a woman at the helm of her family-owned distillery, one that's four generations in. She owes him five hundred thousand dollars and the time has come for Mount to call in that debt--one that Keira cannot afford to pay back. Luckily for her, Mount accepts payment in kind...the kind that goes by the name of Keira Kilgore. Aaand that's all your getting from me. If you're a fan slash reader of Meghan March's, she's taken things to a far dirtier and darker level, and we get to reap all the fabulously filthy rewards. If you've never read her books (WTF?!), this is a good a place to start as the Beneath series (and that's saying something). This is the first in the Mount trilogy, and yes, it does end in an evil cliffhanger. However, the second and third novels will be released in November and December, respectively, so the wait in between each one won't be too torturous (I hope!). Five-plus stars go to Ruthless King. ♥