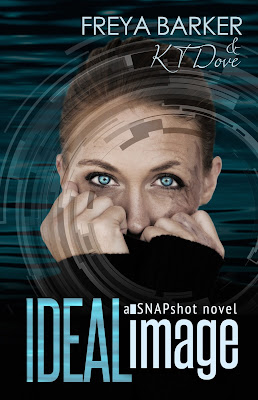 About Ideal Image
In one blinding flash, the very fiber of her existence is shredded.

For criminal lawyer and single mother Stacie Gustafson, a dependable career, a well-organized life, and an immaculate image had always been her armor. Without it she’s left exposed and struggling to create a new existence for her and her daughter. No matter how hard she tries, she is unable to avoid her history.

All it takes is one look at the blue-eyed woman, for Nicholas Flynn to be transported back ten years. Sure, her appearance has changed, but then so has his, since he turned his life around. His devotion to his small-town law firm is tested with the arrival of this bittersweet blast from the past, making for a persistent distraction. One that drags along more trouble than she left behind. 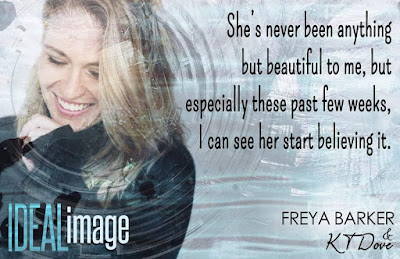 Find the Snapshot series on Goodreads.

An Excerpt from Ideal Image
“Tomorrow let’s tackle the roof on the small barn. Last week when we had that rain come through, the horses stayed drier under the overhang covering the outside pen than they did inside the barn itself.”

I’m glad we’re onto more palatable dinner subjects now. As my Pops ages, his choice of casual conversation over a meal, more often than not, includes the day’s special on ailments or a detailed report on bodily functions.

Today’s topics of choice had been ingrown toenails and the effects of the latest pinto bean crop on a senior’s digestive system. Yeah, my dad can be a laugh-and-a-half at the dinner table.

“Absolutely,” I say, trying not to sound too relieved at the change in topic. “Do we still have a few of those corrugated roof panels we used on the shelter for the woodpile?”

“Probably just one or two,” Pops answers, before taking another massive bite of his hamburger.

“Maybe we’ll head into Cortez in the morning?”

“We can hit Denny’s for breakfast,” he says, slurping the dregs of his milkshake loudly.

Pops is a man of simple pleasures; a regular constitution and a hearty meal. Throw in a beer occasionally and he’s a happy man. He also likes predictability, which is why I’ve made it a point in recent years, to keep my schedule clear on Friday afternoons. We go out for an early meal—Pops like to eat at five—and catch up on our weeks, before planning out our weekend.

I don’t have much of a life outside of work. Sadly, my father is responsible for the bulk of my socializing. Friday dinners at a restaurant of his choice, and the weekends mostly putzing about our property. There are days when I feel more like sixty than the barely forty years I’m old.

I barely register Pop’s voice as I focus on my chicken fried steak sandwich, until the melodic cadence of a familiar voice pierces my awareness.

“First pick a booth, Mak, and then we’ll order.”

I swivel around in my seat to find Stacie’s daughter staring back at me.

“Hey,” I offer in greeting, my eyes immediately looking for, and finding, Stacie behind her. I can feel my face crack open in a big smile.

“Hi,” is the cheerful reply, along with Stacie’s more subdued; “Hello.”

“You friends of my son?” Pops pushes half out of his seat, the paper napkin he habitually tucks in his collar to catch the inevitable crumbs and stains flutters down to the floor, as he sticks out his greasy hand in greeting.

Instead of bouncing my head off the table a few times, which I’d like to do, I also stand up.

“Stacie, this is my father, Henry Flynn. And, Pops, this Stacie Gustafson and her daughter Makenna. Stacie is a colleague.” I’m not quite sure why I add the last, but the moment I see my father’s eyes narrow on Stacie’s face, a feeling of doom settles in my stomach. My pops is not exactly known for tact or subtlety.

“Why don’t you join us?” I quickly ask, hoping to avoid what I know is sure to come. Stacie opens her mouth with what I know will be an objection, but Mak easily slides in the booth beside Pops.

I feel bad for Stacie, who is left standing a little awkwardly next to the table. I grab her hand and gently pull her to sit down. I try to glare at Pops to warn him off when he leans over the table, his head slightly tilted to the side, but he’s like a dog with a bone.

“What happened to your face?”

And there it is.

I’m still contemplating my father’s imminent demise, while desperately seeking for ways to soften the shocked expression on Stacie’s face at the impact of his words, when her little girl pipes up.

“She got burned in an explosion. Gnarly, right? You should see her arm.”

I watch Stacie’s eyes pop open at her daughter’s callous description, but Pops is immediately distracted.

“The explosion up on the mountain last winter? That was your mom? Damn, I heard that was bad.”

“Yeah, but she didn’t, did she?” Pops counters sagely, and I throw up my hands, there’s no way to stop this train wreck. “Looks pretty alive to me.”

Stacie’s eyes, round as saucers, turn to me. Surprisingly, I see a glimmer of humor in their depths.

“Thank God,” her daughter blurts out dramatically, and the whole situation suddenly becomes comical in the most surreal way.

“Yeah—thank God,” Pops echoes, a smirk on his face as he winks across the table at Stacie, who promptly bursts out laughing, and I can’t hold back a chuckle. “Besides, they can fix that, you know?”

“Oh, I know,” Mak says wisely, tucking her paper napkin in the collar of her shirt, mimicking my dad. A move that makes all of the adults at the table smile. “Mom’s having her face done in two weeks.”

After a little confusion—during which the waitress shows up to take Stacie and Mak’s orders, and Pops takes the opportunity to order another milkshake and order of fries—I manage to glean that having her face done means Stacie apparently has another surgery scheduled. 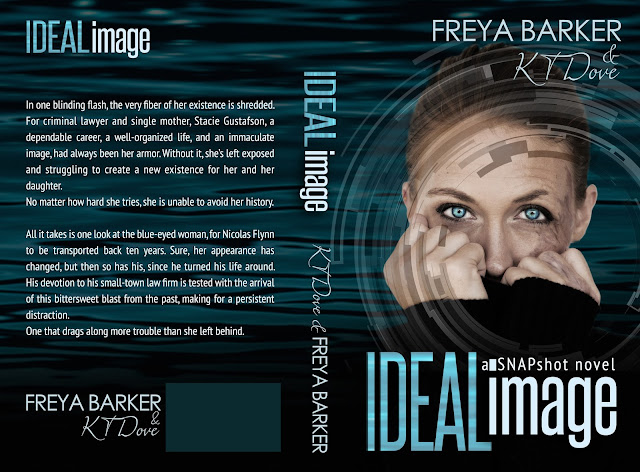 About Freya Barker & KT Dove
Freya Barker inspires with her stories about “real” people, perhaps less than perfect, each struggling to find their own slice of happy. She is the author of the Cedar Tree series and the Portland, ME novels.

Freya is the recipient of the RomCon “Reader’s Choice” Award for best first book, Slim to None, and is a finalist for the 2016 Kindle Book Awards for From Dust. She currently has two complete series and three anthologies published, and is working on two new series; La Plata County FBI—ROCK POINT and Northern Lights. She continues to spin story after story with an endless supply of bruised and dented characters, vying for attention!

KT Dove grew up, and still lives, in the Midwest. At an early age she developed a love of reading, driving the local librarians crazy, and would plan plot lines and stories for her favorite characters. KT received degrees in English, Speech/Drama, and Education. And yet instead of becoming an English teacher as planned, she opted for an unexpected HEA.

Now married, a mother and still an avid reader, she stumbled upon the Indie author movement and became involved on several levels. Never in her wildest imagination would she have thought she would co-author a book. With the support of her family, she took the plunge, adding writing to an already busy literary existence.

She wouldn’t have it any other way.