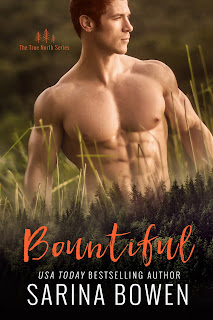 She went still in my arms.

“You’re it for me. I don’t care if there are gonna be earaches and lots of days missing you. I’ll take it, because you’re the best there is.”

I have absolutely no qualms openly admitting that when Sarina Bowen announced that there was a new True North novel in the works, I squeed in delight. I adored the first three novels, which had the author going in a different direction than what I had gotten used to (i.e. hockey romance). With Bountiful, Bowen takes readers back to Tuxbury, Vermont, but in this fourth and latest True North read, she has her Brooklyn Bruisers series crossing over as well. This made for a wholly entertaining read which had the author's usual wit nicely balanced out with a bit of angst. Add to that one highly independent single mother and a veteran hockey player none the wiser to his baby daddy status--thirty-year-old Zara Rossi and thirty-two-year-old David Beringer, respectively--along with a host of nosy but caring supporting characters and you've got yourself a fabulous novel that makes its predecessors proud.

She was just Zara and he was just Dave. No other pertinent information was exchanged between the two when they met at The Mountain Goat in Tuxbury, Vermont and started sleeping together. They knew that whatever was going on would end when Dave left to go back to his regularly scheduled life in New York. The last thing either one expected was a memento of that summer--a memento nine months in the making and later named Nicole. When Dave returns two years later, he's hoping to see Zara once again, but the news she gives him knocks him on his ass. Having children was never on his radar, but how can he possibly turn his back on his daughter? Zara says she doesn't need anything from him, but can the bartender turned business owner and the Brooklyn Bruiser find some middle ground for the sake of Nicole? And maybe if they give it the chance it deserves, they could become a family.

If you're familiar with both the True North and the Brooklyn Bruisers series, then both Zara Rossi and Dave Beringer should be recognizable names. She was introduced as Griffin Shipley's unofficial ex (I'm calling her that since they were never in an actual relationship but she was his constant, umm, partner in bed for an extended period of time) in Bittersweet, was very much pregnant by Steadfast, and had already given birth by Keepsake. On the other hand, Dave was a constant in all three Brooklyn Bruisers novels--Rookie Move, Hard Hitter, and Pipe Dreams--proving himself a more than reliable teammate and friend to the main characters there. I think it was a stroke of genius to bring these two worlds together. I've been quite curious as to who the father of Zara's baby was and was gobsmacked to not just learn the guy's identity but also that he was an established character from another series.

One of my favorite things about this book had to do with the fact that while Zara and Dave already had the whole sexual chemistry going for them, neither one really knew much about the other. While they got to know one another better, so did we, which I liked because they've been around from the beginning of their respective series and this is the first opportunity I've had to actually know their personal histories. I loved how they built a relationship with each other and how Dave did the same with little Nicole. Can I also say that I adored the support system these two had? Their families and friends were fiercely protective but gave them breathing room as well. I'm also hoping that Zara's brothers' stories are in the offing and that my suspicion that a particular Shipley cousin and The Busy Bean's new baker will be paired up is proven right. Fingers crossed! Bountiful receives five-plus stars! ♥