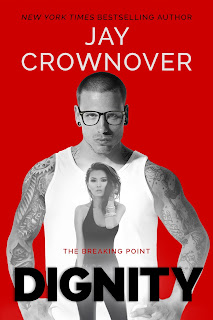 Dignity is the second novel in bestselling author Jay Crownover's The Breaking Point series and it's got two unforgettable main characters who've lived in the periphery of society for years, preferring not to be noticed by those around them. The thing is, computer genius Snowden Stark and thief Noe Lee prove to be unforgettable once you cross paths with them. When Noe decided breaking and entering Stark's residence was a good idea, she was lucky to have left with her loot and life intact. The last person she should turn to when she finds herself in dire straits shouldn't be the one she had recently stolen from, but Noe needs the best at what he does and that is exactly what Stark is. However, he turns her away, and the next he hears, she's been abducted. With guilt eating at him, Stark is willing to do whatever it takes--even make a deal with the devil--in order for him to make sure Noe is rescued and kept safe. When Stark's and Noe's pasts collide, will either one of them survive the aftermath or is there a possibility that whatever it is they've unknowingly been looking for all this time is found with each other?

Once again, Jay Crownover gives her readers an original story that's got equal parts romance and suspense in this second in a series. Stark and Noe are two people who put up a pretty good front in appearing as if they've got it together to a certain degree, not needing the rest of the world. However, they're very much broken, no thanks to experiences in their respective pasts that have made them wary and distrustful. What I loved most about this book was how their worlds and personal histories intersected and how they both realized that they had things to offer one another that no one else could have before. The story is a bit dark, but then that's part of what made it a fun read. There are many things that can be hidden in all the shadows, an din the case of Stark and Noe, those were the things they weren't necessarily prepared to share with other people. This book does work well as a standalone, so even if you've never read the first book, Honor, or the original series, The Point, you can feel free to check this one out without missing too much. So far, so good with The Breaking Point series, and I'm giving Dignity 4.5 stars. ♥

Read my reviews for The Breaking Point series: