Review: Inked Hearts by Lindsay Detwiler (Lines in the Sand #1) 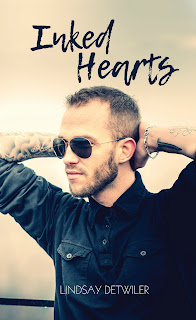 Inked Hearts marks the second time I've read a Lindsay Detwiler-penned novel, and this series starter provided a pretty good read about a twenty-eight-year-old divorcée who moves from Pittsburgh, Pennsylvania to Ocean City, Maryland in order to have a fresh start. Avery Johannas's life in recent years was about being a good wife to her husband and working in her family's accounting firm. When she learns of her husband's cheating ways, she leaves everything behind. When she gets to Ocean City, she finds herself a quirky set of friends led by her new roommate, co-worker, and bestie-in-the-making Jodie. The one thing she isn't looking for is a man to fall in love with. She's done with them for the foreseeable future. She even insists that tattoo studio owner Jesse Pearce is nothing more than a friend. But there's no denying the attraction between the two of them, and with friends pushing her to let go of her fears and to truly live life again, Avery allows herself to fall for the man who's already admittedly fallen. However, when she needs to choose between dreams of the past and those of the present, will Avery stay or go?

In terms of angst or drama, there's very little in the story, unless you count how both Avery and Jesse have become wary of commitment because of their respective experiences with the people they thought would be with them for the long haul. There's a bit of it as well from Avery's parents, particularly her overbearing mother, but otherwise, this really was about Avery's journey from being the woman that she was before Ocean City to the one she becomes and how her dreams change in the process. She was a good enough heroine, though a bit more wishy-washy than I would have liked. Her new bestie Jodie, however, was a hoot, but then so were the rest of Avery's new friends. Then there's Jesse, who I thought was such a great guy. He was shy and hesitant and had his share of insecurities, and who doesn't like a guy who can be vulnerable? I will say that I found the names of some of the characters a bit too similar: Lysander and Alexander then there was Jodie, Joseph, and Addie (Joseph + Addie = Jodie). Sorry, but I notice weird stuff like that. Anyway, overall, Inked Hearts was an okay, 3.5-starred read. ♥