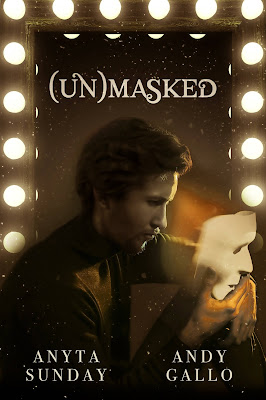 About (Un)Masked
Walker has two wishes: to perform the play of his dreams alongside his best friend at Wellington’s Tory Street Theatre, and to meet that special someone. Someone he’d go to the ends of the earth for. Someone who might only exist in fairy tales.

When Jay meets accordion busker Lethe Cross, it’s like living a dream come true. Lethe’s music captivates Jay, and he resolves to meet the man who plays so beautifully. But then he discovers Lethe’s life is more like a nightmare. The phrase “down on his luck” can’t begin to cover it. Determined to help, Jay does some snooping for answers—and winds up on the wrong end of a centuries-old curse. The good news is there’s a way to break it. The bad news is it might cost Jay his life.

This book was previously published by Dreamspinner Press. This updated 2nd edition has some rewritten parts and has been line edited again.

An Excerpt from (Un)Masked
Lethe turned, and I reached to the beginning of the strap. I was tired. It’d been so long now. I missed seeing him. “Really look at me, Lethe.”

“We’ve talked about this.”

“It’ll hurt you.” He stopped, swinging away from me, shoulders curving. “I’ll be hurting you. And—”

I rested my forehead on the back of his neck. “When you take it off, I’ll be seeing you. Please, look at me.”

His back shuddered, and his voice came out strained. “I can’t take that risk.”

I tightened my grip on his shoulder and moved my head away. “Don’t you trust me?”

“What is this, then?” My insides hitched with my voice, showing the cracks of the broken me that I struggled to keep together. “I’m sick of looking at that stupid mask, Lethe. It’s been too long.”

Anyta Sunday is a big, BIG fan of slow-burn romances. She loves to read and write stories with characters who slowly fall in love.

Some of her favorite tropes to read and write are: Enemies to Lovers, Friends to Lovers, Clueless Guys, Bisexual, Pansexual, Demisexual, Oblivious MCs, Everyone (Else) Can See It, Slow Burn, Love Has No Boundaries.

Anyta writes a variety of stories, Contemporary MM Romances with a good dollop of angst, Contemporary lighthearted MM Romances, and even a splash of fantasy. Her books have been translated into German, Italian and French.

Member of Romance Writers of America.

Andy Gallo’s stories capture how he wished he’d spent his formative years, instead of how it really happened. Unfortunately for his characters, they find themselves infused with some of Andy’s less noble qualities.

A hopeless romantic, Andy writes seated next to a hundred year old Smith Brothers typewriter he inherited from his grandfather. He also dreams of superheroes and wizards and sees no reason why two men with superpowers can’t fall in love just like everyone else. Although not all of his stories have a paranormal bent, a touch of the supernatural never derailed a good read in his mind.

Married and living his happy ever after, Andy helps others find their happy endings in the pages of his stories. He and his husband of more than twenty years spend their days rubbing elbows with other parents as they raise their daughter. Embracing his status as the gay dad, Andy sometimes has to remind others that one does want a hint of color even when chasing after their child.