Review: A Little Too Late by Staci Hart 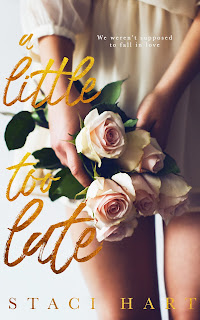 The story of a father falling in love with his children's nanny is nothing new. Heck, it's one that's become fodder for gossip in private circles and in more public venues, no thanks to the very real affairs that very married fathers have with their notably younger nannies. In the case of Staci Hart's A Little Too Late, we have a twenty-two-year-old Dutch au pair named Hannah (I don't recall a last name being given) and a thirty-something lawyer named Charlie Parker who has two young children, Sam and Maven. Separated from his wife, Charlie has tried to do his best to make sure his children are properly cared for, but it isn't until Hannah comes in to their lives that this single father realizes what they've all been missing and learns a thing or two about what it means to be a parent. Hannah brings a great deal of light into what's been a dark period in Charlie's life, but there's something he hasn't been completely honest about. However, it seems that he isn't the only one who's keeping secrets, only Hannah's could very well cost her not only a job she loves but the family that she's become a part of and the man she's fallen for.

This was a sweet story about an unexpected love with a somewhat taboo feel to it. Hannah, after all, was under Charlie's employ, and there were certain things that may seem like nothing more than technicalities, but they were enough to highlight that the relationship between these two had obstacles that were not easily hurdled. Stories that involve caring for children tug at a special place in my heart, what with me having been a preschool teacher straight out of college when I was twenty. I liked that Hannah didn't pander, choosing instead to encourage Sam and Maven to engage and making sure to provide them with structure. She was also exactly what Charlie needed in his life. The poor guy had his wife not only cheat on him but walk out on their family, and for nine months, he was barely holding it together. Now, as much as I liked Charlie and Hannah, the whole demand for complete honesty from both and then not divulging the one pertinent piece of information that could totally break them is a story angle that's a tad too well-worn. Overall though, I really enjoyed A Little Too Late, and it easily gets 4.5 stars. ♥

Purchase A Little Too Late on Amazon | B&N | iBooks | Kobo.