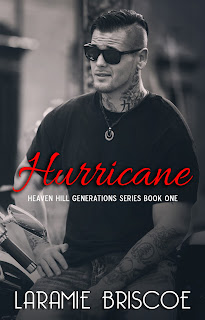 I may have purchased Laramie Briscoe's Heaven Hill series before, but alas, I have yet to read a single book in the collection. Sad, I know, especially given that she's already released the spin-off, Heaven Hill Generations. But if there's one thing Hurricane is pushing me to do most, it's to finally get off my butt and get reading that original series. My curiosity was piqued with each of the older couples that either had an actual presence or was merely mentioned in this new series starter, so yep, the Heaven Hill books as well as the Red Bird Trail trilogy have been nudged upwards on my to-be-read list. But the good news is that, if you're like me and haven't read Briscoe's career-launching novels, you'll still be able to enjoy Hurricane and not feel as if you are too lost or clueless much.

Twenty-seven-year-old Remington Sawyer, who was introduced in the Red Bird Trail series, is a patched member of the Heaven Hill motorcycle club. Aside from his half-brother, along with his sister-in-law and niece, Remy considers the MC his family, yet he still feels alone...lonely. He could have had Tatum Walker by his side, but after he pushed her away and she went on to get back it home by doing something thoughtless, they've kept their distance for a year. Tate being seven years younger plus the fact that she's the club president's daughter should make her someone he shouldn't even consider wanting to be with. However, his heart already belongs to her and he's pretty sure she wants his too. They'll have to deal with the past and learn to trust in order to have a chance at a future.

I love Laramie Briscoe's Moonshine Task Force series and her standalone, Trick, so I went into Hurricane with certain expectations, particularly in terms of the author's quality of storytelling. She took me by surprise with this one. It had far less angst than I thought it would (because most of MC romances I've read before were reeeaaallly angst-ridden). Remy and Tate were already dealing with a situation that occurred prior to the events here in this book. Because I haven't read any of the Heaven Hill novels, I'm not sure if what did happen between them a year ago plays out in one of those books. We do get a good enough idea as to the basics and why they chose to stop speaking. Other than that, Remy's painful and traumatic childhood carries the heaviest weight in the whole book.

Briscoe's writing is mostly on-point, faltering only a bit when certain phrases and sentiments are repeated rather closely together. Other than that, she proves that she is indeed--yet again--more than capable of giving me a story that was worth reading. I really liked Remy and Tate together, although my I so empathized for the younger version of Remy, especially after having learned exactly what it was he had to endure as a child. It's because of that past of his that I'm now super curious about his half-brother and sister-in-law's story (told in the Red Bird Trail books). Then there's also the story of Tate's parents. It is rather ingenious because I'm going to need to read the other books before the second Heaven Hill Generations book comes out. For now, though, focus on Hurricane. Four stars. ♥