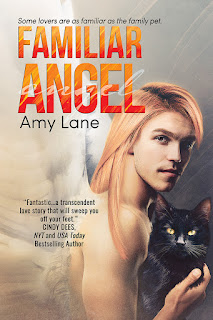 All these years and so many fears.

What Harry had feared most had been what Suriel would endure to be at Harry's side.


Can Amy Lane do no wrong? I already knew she could do angst as well as lighthearted fare. Heck, she's already shown that she can write romantic suspense really well. After reading Familiar Angel, she's obviously more than capable when it comes to fantasy. This is only my tenth Lane-penned read, and it's the first one in this particular genre, and I was thoroughly impressed. When I was trying to think of how to start this review, what initially popped in my head was the line "A sorceress, a demon, and an angel walked by a blueberry bush and walked away with three cats named Harry, Edward, and Francis." Essentially, that's how this story begins, but maybe that's oversimplifying things because this was also about creating a family, finding one's purpose, and sacrificing for love.

Harry McTavish was forced into a life he never wanted when his mother died while one of many whores at Golden Child. In the process, though, he met Edward and Francis, and while not bound by blood, they became brothers, bound by love and concern. Harry would then find himself with a surprisingly new life, one that has him and his two brothers becoming shapeshifting cats, all thanks to extraordinary beings. A century and four decades later, Harry has a family and a purpose, but he knows there's something--someone--missing in his life: an angel named Suriel. However, Suriel is bound, and while he's willing to endure what rescuing and spending time with Harry continues to cost him, how can he be sure that breaking free to be with his brave boy will be worth the sacrifice?

I love how the story felt so perfectly balanced in terms of the moments of light and darkness that the cast of characters had to go through. Harry and Suriel were unlike any other coupling I've encountered in any of my recent readings. Being together seemed to entail experiencing Heaven AND Hell on Earth, as well as Hell in Heaven in the case of Suriel. This made me think of how far I would go for the person I loved most and how would I feel if I learned just how much they, in turn, were willing to sacrifice to be with me. It wasn't just Harry's life that was changed on the night that worlds collided; Suriel's was as well. After loving each other for nearly a century and a half, the time had finally come for these two to make certain decisions, and none of them were at all easy to make.

But while their story is at the forefront of this book, at the heart of it was love--whether it be for family, a significant other, or a particular set of individuals (i.e. victims of human trafficking). Harry and Suriel, as well as Edward, Francis, Emma, Leonard, and the rest, were willing to go above and beyond for the family they had created and for the young people they rescued. No one, after all, ever said that love was easy, but when we make difficult choices and put our lives on the line then they become potential but worthwhile sacrifices. I'm in awe of this book, although I do wonder if Edward and Mullins plus Francis and Bel will get their own stories told sometime soon (yoohoo, Amy Lane!). For now though, I shall bask in the wonderfulness that is Familiar Angel. Five-plus stars. ♥