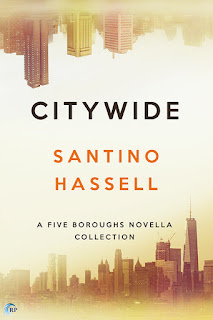 "I don't trust a bunch of people who are suddenly interested in diversifying their sex lives with our squad," Raymond said flatly.

Three stories, one citywide blackout, and a heatwave that has nothing on the scorching encounters that occur within the five boroughs of New York--need I really say more? The location should clue you in on which series this is a part of and who the author is, but if you're new to both, this three-novella collection is part of the Five Boroughs series penned by Santino Hassell. You could think of this as a sampler platter slash buffet because as much as all three stories don't leave you hanging, you may be left for a hankering of even more...umm...hanky-panky. Let's be honest here, it's difficult to resist the pull of this ragtag crew from Queens and they're not-so-new friends from the upper crust of New York society. I doubt there is such a thing as "enough" when it comes to this series. However, I'm more of an advocate for "always leave them wanting more," and this collection so succeeded.

"Every time you make me feel like I stand a chance, I tear myself apart bouncing between wanting to believe it...and wanting to run away."

Citywide starts off with Rerouted, which has IT whiz Christopher Mendez caught between a rock and a hard place. Or maybe I should say two hard places, considering we're talking about married couple Aiden and Jace Fairbairn here. Chris's encounters with the two have been nothing but memorable, but as much as he wants and needs them, he can't quite wrap his head, what more his heart, around the fact that they're in an open marriage. So, does the threesome that's made many a Five Boroughs reader and fan become a triad or throuple (a term I had never come across till this book!)? I won't say. However, what I will share with you is how my heart went out to these three, but especially Chris, who's always had his fair share of insecurities that make him feel like a consolation prize than what he really is--and what Aiden, Jace, and his friends hope Chris realizes--an absolute gift.

"What is it about you?" I rasped against her lips. "I've been wanting this since that fucking cruise, and every time I touch you, I just want more and more. And I don't think I'll ever get enough."

The second novella, Gridlocked, belongs to bodyguard Tonya Maldonado and QFindr spokesperson Meredith Stone. They shared one unforgettable hook-up at the QFindr photoshoot, but one flippant remark on Meredith's part has made Tonya wary of her. But when Mere's life is put in danger, Tonya's protectiveness comes into play. Just when things look promising between them, Mere's past and Tonya's future could very well mess up their present. The thing is, these two are hot together, and I loved that Tonya wasn't this non-binary character demanding people use the proper pronoun or correcting them when they make certain assumptions. She is who she is and since she has very few fucks to give, she picks and chooses when to dish them out. Of course, Mere isn't exactly some shrinking violet and she gave as good as she got. They're very different people, but their story was far from boring.

After only a second of hesitating, I grabbed her hand and started walking again. "Maybe someday it will be you."


If Chris, Aiden, and Jace had the will-they-or-won't-they vibe, so did Stephanie Quiñones and Angel León but ten-fold that of the trio. Derailed finds the non-couple trying to make a go of a purely platonic relationship. Easier said than done, especially with the kind of off-the-charts chemistry these two have going. But they're stuck in neutral, what with Stephanie making her longstanding stand on relationships (a definite NO) known and Angel actually wanting one with her. Maybe a work-related retreat will help them come to some sort of firm decision. Of course, how much contemplation can these two make when surrounded by Stephanie's boss and co-workers? These two were such a revelation, and they were the one relationship that I felt could have gone either way, which is why I was anxious till the very last page as to the outcome of their story. Angel was easily one of my favorite characters.

"Be good, man. Figure that shit out once and for all."


I started this review with a quote from Raymond Rodriguez, who may not be my favorite 5B character (maybe because he kinda-sorta-maybe reminds me of myself), but the guy's got words of wisdom when he feels you're worth his time and attention. Chris, Aiden, and Jace, Tonya and Meredith, and Stephanie and Angel all have shit that need figuring out, and ultimately, they do figure some of it out. Do I think they figured EVERYTHING out? Nope, because that's not how the world works, and if there's one thing I've always appreciated about this series, it's that there's no sugarcoating involved. The characters know they need to constantly have to work at what they have, but it gets easier because they don't have to do it on their own. Yes, the Queens crew have always had one another, but having significant others represents a more intimate kind of support that fortifies their entire system.

There were a couple of notable non-Queens crew supporting characters in this collection that are worth mentioning. We have Stavros, who was also a bodyguard and Tonya's co-worker in her story with Mere. I'm not sure if he's going to be showing up in either of the two remaining books in the series, but he made enough of an impression here for me to be welcome to his return. Then there was the far more memorable Victor, who is Stephanie's younger brother. Other than Angel, Vic isn't exactly a favorite among the Queens crew, having gained a reputation for being a gangbanger and starting physical fights with both Ray and Tonya. He's reformed himself, and I'm curious to find out what more to his story is waiting to be told. I was missing Charles as well as Clive, but with them taking center stage in books six and seven, respectively, in the series, I can wait a few months. Well, I can try.

Going into this collection of 5B novellas, I know there was going to be an M/M/M story, an F/F one (though I think it's more appropriately categorized as an NB/F story), and an M/F one. The author's already proven himself quite adept at writing M/M and has written M/M/M (hello, Michael Rodriguez, Nunzio Medici, and David Butler in Sutphin Boulevard) prior to the M/M/M vignettes involving Chris and Jaiden in Third Rail plus the M/F/M combo of Chris, Ray, and Steph snippet in Corrupting Chris. But F/F and M/F are pairings I've never read from Santino Hassell before. So...how'd he fare? Frickin' fantastically. I swear, the guy seemed to seamlessly move from one sub-category to the next with nary a thing to nitpick. Dare I say that the F/F is one of the best I've read this year, and he's got M/F absolutely pegged (pun intended). The much-awaited Citywide was so worth the wait. Five-plus stars. ♥