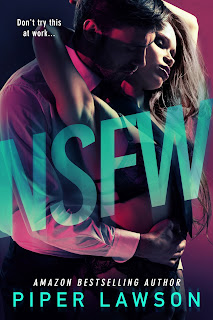 Note: This ARC was provided by the author via Author's Pal in exchange for an honest review.

If you loved Play and recognized Charlotte Merriweather, aka Charlie, was a scene-stealer as much as I did, you're proabably as thrilled as I am that she's got her own love story to share, and Piper Lawson did her justice. Twenty-four-year-old Charlie does a darn good job in her position at work. She does, however, push the envelope, and by that, I mean she pushes her boss, Avery Banks, and every single button of his that she can get to. Maybe it's because the man has never smiled at her in the two years she's worked there. Maybe it's because he looks at her as if she were nothing more than dirt on his shoe he constantly has to wipe off. Avery isn't even thirty yet but the guy is stiffer than a geriatric suffering from arthritis from head to toe. When he finds out how she's been messing with him, he's intent on making her pay. Pretty soon though, they go from exchanging barbs to swapping spit. Harmonious inter-office relationships are encouraged, but I don't think HR had the kind of interacting that Avery and Charlie having going on. What they're doing isn't safe for work, but may prove more disastrous to their hearts.

Piper Lawson writes dirty and she writes it well. The fact that she liberally doses it with sharp wit makes her stories more than "just" smut. It would be easy to call NSFW an office romance or an enemies-to-lovers story since this book happens to be both. But it's also much more than that. I loved Charlie and Avery and how they were so much more than boss and assistant. They seemed to both barely tolerate each other while trying to not acknowledge how much they tempted one another. There wasn't all this pining because it was pretty clear how much they didn't like each other...but that "dislike" was masking something else as well. The development of both the characters and their relationship was fantastic and the overall effect was pure entertainment. Avery may have come off as a jackass in the beginning, but I love how the author unraveled that hard outer crust so we could see--and fall in love with--the soft center that made Charlie all gooey. Play was my first ever read from Lawson, and I adored that book. I'm happy to say that I loved her follow-up to it just as much. I highly recommend NSFW and easily give it five stars. ♥