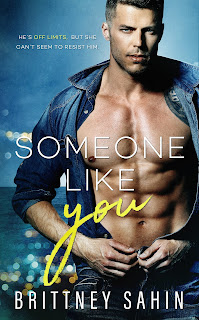 Brittney Sahin is a new-to-me author and Someone Like You was a good introduction to her writing. Sahin's latest release, which I suspect is a series starter or a standalone that has the makings of spinning off other standalones, is the story of thirty-two-year-old former Navy SEAL Noah Dalton and twenty-nine-year-old heiress Grace Parker-King. Noah learns three things over one conversation on the phone with his wife while he's on tour: she and their daughter Lily are moving to New York, she's been in a year-long affair, and she's filing for divorce. On the other hand, Grace may seem as if she has everything any person could ever want, but after one harrowing experience in Athens, Greece, she's no longer the woman she once was. They're two broken souls but opposites who aren't looking for any sort of happily-ever-after...except...maybe it'll take someone so unlike the other to fall in love with.

Noah's life changes drastically, forcing him to retire from a job he loved and following his daughter to New York. When his soon-to-be ex-wife threatens to take away joint custody and informs Noah of three new things once again: she and her wealthy boyfriend (the same one she was having an affair with) are having a baby, they're rushing to get married, and her now-fiancé wants to adopt Lily. He refuses to have Lily taken away from again, and this time around, the threat of permanence spurs him to fight back. Grace outwardly represents the kind of world he thinks is trying to take Lily away from him, but once these two realize that what they have is more than a passing fancy, their connection is rather electric. Their romance is hot and there are moments that it gets quite dirty (the best kind of dirty, of course!) but there's also lots of sweetness between the two of them as it develops.

Aside from the romance, there are also certain issues that Noah and Grace have to face as individuals--his custody battle for his daughter Lily and the incident that changed her life in Athens. Can I just say how much I dislike Noah's ex? She was a total and absolute bitch and I swear, I wanted to slap her a time or two for her treatment of Noah. That doesn't mean that there wasn't someone I wanted to smack on Grace's side because hello, her father was such a jerk, not just to her but to her brothers as well. Speaking of her brothers, Cade and Corbin, they--along with Noah's sister, Bella, and his close friends, Luke and Jessica Scott--are the ones who have me wondering if this book could be the start of something promising (cough, series, cough). I've got my fingers crossed that my suspicion is right because Someone Like You has made me realize that Brittney Sahin is an author to watch out for. Four stars. ♥

Purchase Someone Like You on Amazon | B&N | iBooks | Kobo.