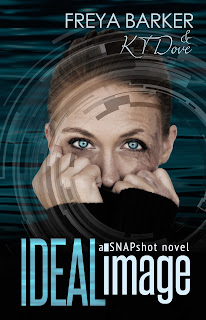 The writing duo of Freya Barker and KT Dove left me impressed with the start to their Snapshot series, but talk about surpassing expectations with the follow-up to the prequel novella and first full-length novel! Ideal Image is the story of Anastasia Gustafson, who was introduced in book one as the younger sister to the male main character there, Ben Gustafson. Stacie was leading the ideal life, one that saw her as a successful criminal lawyer and a doting mother to her daughter Makenna. But all of that was torn asunder, shattered into pieces that dug beneath her skin and left her scarred in more ways than one. When her path intersects with small-town lawyer Nicholas Flynn, the gobsmacked look on his face makes her think that he's disgusted with her appearance, making her, in turn, disgusted with his attitude. But what Stacie doesn't realize right away is that she and Nick have met already and in the ten years since, forty-year-old Nick has never forgotten the woman five years his junior. Both their lives have changed in the time since, but maybe going forward, this could be the opportunity for them to realize that they no longer have to be alone. However, Stacie and Nick are going to have to deal with the hurdles that are placed before them--hurdles that could very much break what they're just beginning to build if they allow them to.

My lack of patience isn't exactly something I try to hide. I don't like waiting, but when it comes to well-crafted novels, I seem to unconsciously set aside that impatience, as was the case with Ideal Image. I don't know how the authors chose to split their writing responsibilities or what process they have, but whatever it may be, it appears to be working and it's definitely working well. There's romance and suspense and both are at par with those written by far more seasoned and more established authors. Stacie and Nick led this cast of characters that I couldn't seem to get enough of. What you saw was what you got, and amidst the imperfections that these characters carried, they simply felt real. Stacie was a woman who had a backbone made of titanium, and she fought for what she believed in. Nick was a man who was devoted to his law firm, knowing that he was doing what he was meant to for the betterment of his clients. The peripheral and supporting characters seemed to bring even more to the table than you would expect, but there is one that needs to be spotlight--Becca. She broke my heart time and again, and I doubt that the story would have been as impeccable as it was without her in it. I hope Barker and Dove know what they've set themselves up for because readers are demanding more of Snapshot. Five stars for Ideal Image. ♥

Read my reviews for the Snapshot series: