Book Spotlight: In Too Deep by Jordan Marie 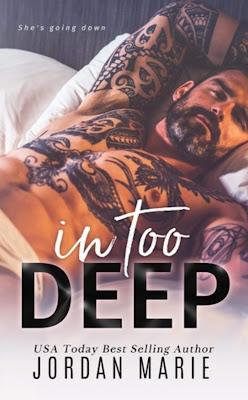 About In Too Deep
I did a bad thing.

I did a really bad thing.

I’m not a bad person, I swear. I just made a few mistakes.

Mistake number one was agreeing to rent my hotel out to an insufferable a**hole, named Aden Smith­.

Mistake number two was ignoring his threats to sue me when he handed over a list of items he deemed “unacceptable”.

Mistake number three was diving into the pool to save his life when he fell. It would have been less complicated to hide his body.

When the hospital refuses to let me know how he is, I panic.

Claiming to be his wife might be my biggest mistake yet—especially when he believes me!

He might have been the one drowning, but I’m sinking in a bed of lies, going down fast—and there’s not a rescue in sight. 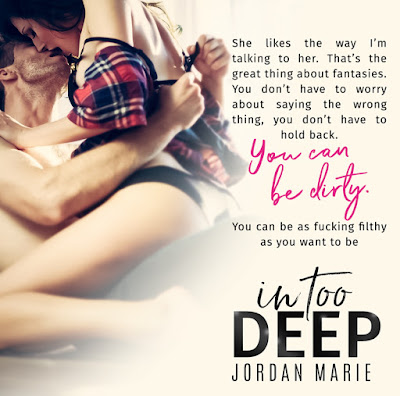 Add In Too Deep on Goodreads. 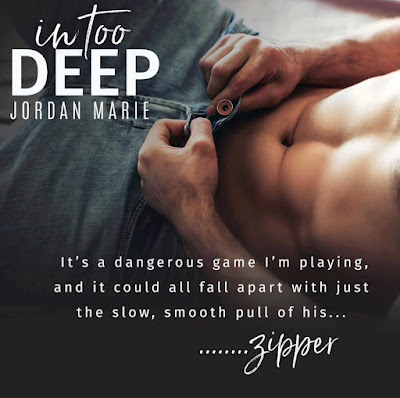 An Excerpt from In Too Deep
Aden
I planned to apologize. Really—I did. I was dreading it. In my experience when you apologize to a woman you show them weakness, and with weakness they smell blood. It never ends well. Still, I shouldn’t have said what I did about her. I was going to the office to say I’m sorry, see if there was literature about where I can find a place with take-out food and leave—quickly.

One thing stops me.

I open the door to the office and this small boy comes running out at me, completely naked. He slaps his hands against my legs, just reaching above my knee. I stop quickly so I don’t plow him over.

“You my Daddy?” he asks. I know nothing about kids, but I do know one of the last things I ever want to hear from one are those words. His question strikes fear in my heart, but the fact his hands are covered in some dark brown unknown substance terrifies me. I watch as it smears across the legs of my favorite jeans. I’m not sure what it is, but he’s not wearing any clothes—including a diaper. Do kids his size wear diapers?

“Jack! You get back here right now young man!”

The child screams the name like it’s being torn from his heart, the moment White’s cousin captures him in her arms and pulls him away. The scream is so piercing I wince.

“Do you need something?” she asks over the noise. Her face instantly hardens, whereas just a moment ago she was smiling, even chasing after her son.

“Does he belong to you?” I ask, all thoughts of giving an apology gone. My voice is that of a growl really. It seems this woman brings out the worst in me.

“He destroyed my clothes.”

Her eyes go round and briefly I notice she has brown eyes…almost as dark as whatever the child rubbed all over me.

“Daddy!” he screams again, and the woman’s face blushes a deep red.

“Hush, Jack. That’s not your Daddy,” she hisses.

“He doesn’t know who his father is?” I don’t bother keeping the censure out of my voice. This entire revelation doesn’t surprise me. I’m making a mental note to punch White in the face the next time I see him.

“It’s just chocolate. It will come out of your pants. You should probably flush it with club soda or…”

“Does your hotel even have laundry service?”

“There’s a laundry mat in town,” she says defensively.

“Is there something you need?” she all but growls, her face tight with irritation. 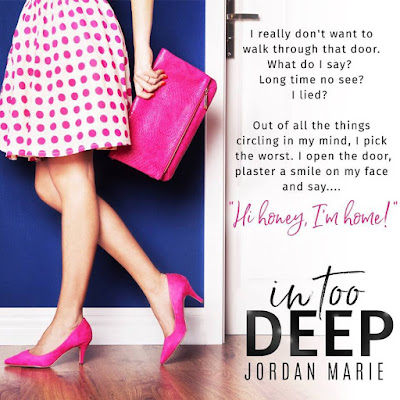 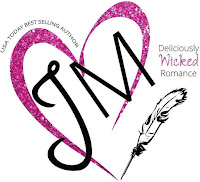 A QUIRKY WRITER GOING WHERE THE VOICES TAKE HER.

USA Today bestselling author Jordan Marie, is just a simple small town country girl who is haunted by Alpha Men who talk in her head 24 hours a day.

She currently has 14 books out including 2 that she wrote under the pen name Baylee Rose.

She likes to create a book that takes you on an emotional journey whether tears, laughter (or both) or just steamy hot fun (or all 3). She loves to connect with readers and interacting with them through social media, signings or even old fashioned email. 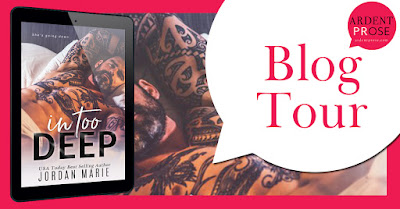