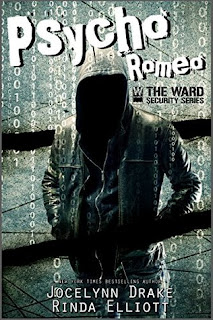 Oh, who was he kidding? Blond, twik, smart-assed, and loved to bottom. He was practically the epitome of cliché. And he didn't give a shit.

And falling for Sven like this put him over into full-on Hollywood character mode. Now the question was...did this movie have a wonder rom-com ending or had he inadvertently stumbled into a teary drama where the wonderful lovable gay lead perished in a horrid, untimely death?

Psycho Romeo is my introduction to both the writing team of Jocelynn Drake and Rinda Elliott and their new Ward Security series, which is a spin-off of their Unbreakable Bonds books, which have all promptly gone on my to-be-read list thanks to my rather superb reading experience with this new series starter. There are other couples and characters here that I'm guessing were part of that original series, so potential spoiler abound for those like me who have yet to read it. However, based on my own time with this book, I feel you'll be able to thoroughly enjoy this without having read previous novels. Fair warning: you may end up curious then desperately want to know how those other couples met and fell in love. Sneaky yet quite ingenious, but if the Unbreakable Bonds series is as good as what Ward Security is shaping up to be, then I shall gladly devour every single book I can get my hands on.

Geoffrey Ralse is a social media star with millions of followers keeping tabs on all his movements with each post he makes. He also happens to be a self-made millionaire who created an app used by countless of people everywhere and he become his younger brother's guardian after the deaths of their parents. When Geoffrey is targeted by a stalker, the creepy messages were something he pushed aside. When he realizes he's been drugged and possibly molested, he's chilled to the bone. He knows Ward Security can provide him with what he needs, but he's got only one person on their staff that he trusts implicitly: Sven Larsen. He's made no secret of how much he wants the hulking Viking, but one look at the usually flirty, fun-loving guy now looking fearful, and Sven recognizes how serious his situation is. But can Sven stay focused on keeping Geoffrey safe when he's distracted by his attraction?

Holy crap but this book was such a surprise. When I read something from an author--in this case, authors--who are new to me, the most I often hope for is pure enjoyment. Well, Drake and Elliott made sure I had that and then some! The pacing of the story was quick and never wavered from the romantic suspense feel it had going. It never felt as if there was any sort of lull in the storytelling, even in the quieter moments of Geoffrey and Sven getting to know each other better. I loved seeing these two together. Geoffrey was the far more outgoing one between the two of them, but Sven's quiet yet strong presence was exactly what he needed, providing that perfect balance in their burgeoning relationship. Maybe they were both at points in their respective lives where they were more than ready to be with that one person--someone they could be fully committed to. These two were sexy and adorable.

As for the stalker, well, I'm going to be perfectly honest and admit the person who it turned out to be was never even on my list of likely suspects until one particular part in the story, and I was already halfway through the book by then. The motive behind this stalker's actions knocked me for a loop, but even that had a twist within it! Gah! I pride myself on figuring these things out when I read books that fall under this genre, but I also get a perverse kind of thrill when an author is able to keep me guessing for an extended period of time. The stalker also happens to be part of a strong cast of characters that gave this book that extra oomph. We also get just enough on the other single guys in Ward Security to tickle our curiosity without ever taking attention away from Geoffrey and Sven. Here's hoping that the rest of the series is as good as, if not even better than, Psycho Romeo. It gets five-plus stars. ♥