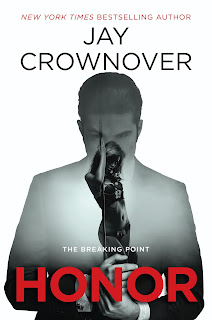 “Well, I’m here now, so no more fighting to go along with the no touching.”

I watched his jaw clench and his eyes light up at the center like a hot ember.

“We’ve been fighting against each other for years, Key. Are you going to stop? Are you ever going to let one of us win?” I pressed so close to him that he had to suck in a breath and lean against the counter to stay upright and support my weight without putting his hands on me.

“It hasn’t been fighting, Nassir. It’s been foreplay.”

Why, Jay Crownover? Why do you write these series starters that suck us in and make us antsy in anticipation for the next book? How could you do this to us?! Gah! Seriously, this book was just...wow. I admit that I was waffling a bit after the first chapter. I felt as if I was missing something, like maybe I should have read The Point (or is it Welcome to the Point because that's what it's categorized as over at Goodreads) books first because The Breaking Point is spun off of that series. But as I continued reading this series starter, I found myself slowly but surely becoming invested in all things Keelyn Foster and Nassir Gates, or as I call them, Honor and the Devil. This book had action, suspense, and romance Nassir-style. And sex. A lot of HOT sex. When Nassir and Key reach their breaking point, they take no prisoners.

From the moment Nassir Gates stepped in to protect Keelyn Foster from an overly aggressive customer, their fates were merged and sealed. Time passes and after Key's life is almost ended, she leaves, refusing to be anywhere near Nassir or the Point. The conflicting thoughts and feelings follow her to Denver, and that's exactly where their paths cross once again. Nassir wants Key back in the Point, and he offers her a deal that he hopes will convince her to return. After all, he's used to getting what and he's prepared to play dirty if necessary. However, Key is no pushover and she's ready to play even dirtier. But as much as Key wants to be with Nassir, she refuses to give him her heart--the one thing Nassir craves most. Will these erstwhile lovers realize quickly enough they're better together before outside forces endanger their lives?

Two points that I need to make: First, I shall be making a point of reading The Point books before the release of the second novel in The Breaking Point; and second, it is pointless to resist the story of Nassir and Keelyn, so take my advice and read this series starter as soon as humanly possible. There's an undeniable darkness that shadows Nassir and it's something that's so ingrained in him that it's second nature. However, Key is that x factor, the one element in his life that makes him want to be a better man, that makes him realize that, maybe, just maybe, he isn't as much of a monster as he sees himself to be. She accepts him wholeheartedly, and it's that which inspires him to be more for her. These two were strong as individuals, but together, it wasn't difficult to imagine them as invincible. I'm giving Honor five-plus stars. ♥