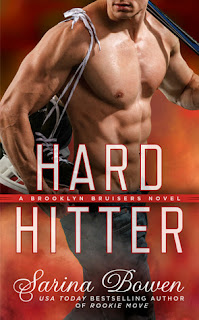 There's no denying what a force Patrick O'Doul is on the ice, setting an example of excellence for his fellow Brooklyn Bruisers. When it comes to yoga, however, Doulie can't seem to let go as much as the rest of those taking the class. Naturally, the one who notices is none other than Ariana Bettini, the Bruisers' yoga instructor. Ari also happens to be the team's massage therapist, and hasn't slipped her notice that the team captain doesn't show up for his scheduled appointments. When he does finally make it, it's clear that he doesn't like being touched, which piques Ari's curiosity about the guy even more. The last thing she needs, however, is to start noticing things about the man she knows prefers calling "Patrick" over his more popular nickname. The last time she was single was eight years ago, so dating Patrick isn't part of her plans. But he's there whenever she needs him, especially when it involves her ex. Patrick is prepared to do whatever it takes to get Ari to date him, even ask his teammates for suggestions, but it could take more than he's capable of to convince the woman he's falling for he's worth the risk.

The awaited second Brooklyn Bruisers series AND appearances from my two most favorite couples in the Ivy Years series?! Yes, please! Hard Hitter was my second Sarina Bowen read in a matter of days, having read a co-written series starter on Christmas Eve and then this Brooklyn Bruisers novel on New Year's Eve. No one pens a hockey romance quite like Sarina Bowen, and with thirty-two-year-old Brooklyn Bruisers captain Patrick O'Doul's story with twenty-nine-year-old team yoga instructor and massage therapist Ariana Bettini, there's some suspense thrown in to keep readers on their toes. There's a lot of push and pull between Patrick and Ari, especially since she's trying her damnedest to keep him at arm's length or, at the very least, keep things casual between them. For such a quiet and gruff guy, Patrick surprised me with how far he was willing to go for Ari and the man proved to be quite the romantic. I felt for him when his past was revealed, but I love how Ari was gentle and encouraging even before she knew about what happened to him as a child in foster care. There's a bit of angst but not a lot of drama.

I admit that series starter Rookie Move is still my favorite between the two, but I can't deny that Patrick and Ari's story along with a smidgen of Ivy Years nostalgia made Hard Hitter the perfect way to end last year. I'm tempted to say which among the Ivy Years couples show up here, but I think part of the thrill was coming across them as you read the book, at least that was my own personal experience, so I'm going to encourage you to read the book and "stumble" upon them like I did. I know that Mike Beacon and Lauren Williams are up next in Pipe Dreams, but I've got my fingers and toes crossed that the couple I'm most curious about--team owner Nathan Kattenberger and office manager Rebecca Rowley, aka Nate and Becca--also get their story told later on, whether as a novella or a full-length novel. I'm not picky. Really, I'm not. There are also a number of other hockey players that I couldn't help but notice, but I know that asking for every single one of them to have a book would be unrealistic, so I'm just sticking with Nate and Becca. So far, the Brooklyn Bruisers books have left me sated. Hard Hitter receives five stars. ♥

Read my reviews for the Brooklyn Bruisers series: