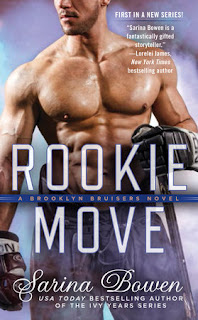 Note: This ARC was provided by Berkley Publishing Group in exchange for an honest review.

Leo reached up with one of his long, edible-looking arms and tugged her back down onto his spectacular chest. "Fuck that," he said. "You and I don't have one-night stands. We have forever night stands."

Georgia's heart took an an hour-long tango lesson when he said that. When she'd been young and deep in puppy love, she and Leo had used the word "forever" with each other. And then when they hit the skids, it had hurt worse than anything. She turned her face to the side, turning away from all the brilliance that was Leo. It was hard to think rationally while lying on his body.

But Leo only began nuzzling the back of her neck. "You can run, but you can't hide, Georgia girl. Even if you give me the cold shoulder on the plane today. Even if you go all shy on me. It's on."

Yes! We finally get to read Leo Trevi's story with the release of Rookie Move, the first novel in bestselling author Sarina Bowen's new hockey-inspired contemporary romance series, Brooklyn Bruisers, which is a spin-off of sorts of her highly popular new adult Ivy Years series. Leonardo Trevi should be familiar to fans of the aforementioned series and I'm glad that he gets his happily-ever-after in this series starter, especially after learning the heartbreak he endured in high school with his then-girlfriend and the only girl he's ever loved Georgia Worthington. Leo's and Georgia's paths unexpectedly intersect six years after she ended their relationship, making Rookie Move a second chance love story with every bit all the hockey action interspersed with the romance that readers have come to expect from a Sarina Bowen-penned masterpiece like this one. You don't necessarily have to be fluent in all things Ivy Years--although I do highly recommend you check that series out--to enjoy the Brooklyn Bruisers books, which I hope will expand from the already announced three to more because there are several quite noteworthy characters.

Being traded to the Brooklyn Bruisers means Leo Trevi gets his shot, moving from the minor to the major league. He's more than prepared to put in the work and prove that signing him on was the right move for professional hockey's latest franchise team. What he isn't prepared for is to come face to face with the girl who broke his heart when they were eighteen, the same girl that he planned to spend forever with. Six years may have passed but Georgia Worthington still has a firm hold on the pieces of his heart. She's as beautiful as ever, but the Brooklyn Bruiser's publicist is different from the fearless teenager he fell in love with. She's wary of being around him and it's clear that she wants to maintain some form of distance, but Leo's pretty sure that the connection they shared is still very much present, if only he can convince Georgia to take a chance on being together again. Another person he needs to convince to give him a shot is none other than Georgia's father, who just happens to be his high school coach and now the Brooklyn Bruisers new head coach. Leo knows that he's going to have to come up with one hell of a play and not make any rookie mistakes if he wants to prove his worth to his new team, but most especially to the woman he loves.

Gah! I wanted to temper my response to Rookie Move, lest I be accused of being a fangirl. Sorry, but I simply couldn't do that with this book. Okay, I'm not really all that sorry. One of the things I love best about Sarina Bowen's writing is how multi-layered the story and the characters are. She isn't giving her readers a fairy tale; what she gives is a bona fide novel that never scrimps on either style or substance. You get sucked in from the get-go and you get so into what's happening to, between, and around the characters, and I'm not just talking about the main characters. I love that the supporting characters are always more than just props. They make you curious about what stories they have to tell and have you itching to learn all their secrets as the series progresses. Leo and Georgia already piqued my interest when their back story was mentioned in The Fifteenth Minute, although Leo was introduced in The Understatement of the Year, and even though that book was released nearly a year ago, the anticipation for these two to get their happy ending has never abated. Rookie Move was a story about chances, those that we take and those that we're given, and how we make the most of them instead of letting them pass us by. I won't soon forget this, and I'm already counting the days until Hard Hitter's release. Five-plus stars. ♥