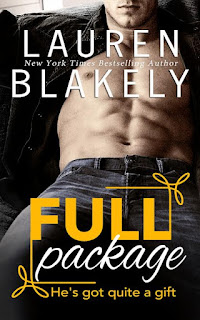 She holds out one hand like a scale, weighing the situation. "I need a roommate. I haven't found anyone who isn't crazy." Then the other hand. "You need somewhere to live. You haven't found any place that isn't cursed." She brushes her palms together. "And let's not forget we get along super well, and always have."

I nod vigorously. "We're like the poster children for getting along well."

"I mean, has there ever been a guy and a girl friend who get along as well as we do?"

I slash my hand through the air. "Fuck no. Not in the history of the world."

No fair, Lauren Blakely. How is it even humanly possible that you keep dishing out these hot as hell Men of Rom Com who are paired with fabulously fantastic women and not disappointment me even once? Gah! I can't even choose who I think is may favorite rom-com guy, girl, or couple. It's like choosing between a pair of must-wear pair of shoes and a must-buy bag. I mean, hello? Leather goods are must-haves, both for your tootsies and the kind you can tote around. So, seriously, the more irresistible guys Blakely gives readers to fawn over, the more difficult it is for real, live, breathing men to compete with these drool-worthy, heart-thumping book boyfriends. Chase Summers is the latest rom-com hottie and can I just say that I was brought to the emergency room TWICE (one visit coming a few hours after the other) in 2016 and there was no Dr. McHottie to be seen. At all. Not even when I ended up hospitalized for several days after the second ER visit. I don't think I can even recall ever encountering a hot doctor, whether in the ER or elsewhere. This makes me wonder if they're exclusively found in books and on TV.

Chase Summers is the king of compartmentalization. It's what makes him a good ER doctor and it's what's going to help him survive being roommates with his best friend's sister. It isn't because Josie Hammer is a woman he can't stand. On the contrary, Josie is the one woman he's wanted for years...but he knows he can't have her and he has no intention of pursuing her. Nope, Chase is putting everything--and Josie--in their proper place. They're friends. Close friends. They tease and kinda-sorta-maybe flirt. But that's it. Nothing can ever come from it. He's got this. There's no way he's crossing over to the dark side. So what if Josie is more tempting than her sweet concoctions and creations? So what if she's gorgeous and kind and funny and smart and...yeah, you get the picture. But she's in that no-go zone. Until, that is, she sleeps with Chase. And it would have been okay had they actually gotten much sleep. Now, they're in limbo. Chase has already experienced heartache at the hands of a woman he considered his closest friend and then they had a romantic relationship. Can he risk it all again with the full package that is Josie?

If you've read the prior books, you'll recognize Josie as Nick and Wyatt Hammer's younger sister, introduced in Mister O and is also mentioned in Well Hung, and Chase as Wyatt's close friend in Well Hung. These two have such a wonderful chemistry between them, even when things were merely platonic. Of course, it becomes clear as their story goes on that they've noticed just how darn delectable they find one another, a fact that neither one is actually prepared to share with the other. Their friendship means too much for them to tamper with, even if there's an attraction there. There's depth to both these main characters, and it was fun to get to know both of them. Their banter is easy and their obvious affection for each other was endearing. But then, things become complicated and because these two are so darn likable, you really want them to get over all those challenges and realize that they belong together forever. Total fangirl mode? Yup. These two inspire that kind of devotion. Full Package is, indeed, the full package. It's sweet, silly, sexy--plus everything you'd want in a rom-com. Five-plus stars. ♥