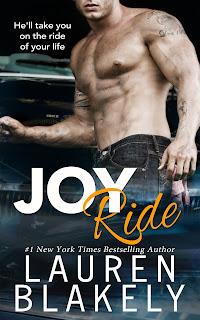 My lips quirk in a grin as she reminds me of me. Of how I talk to her in these moments. Without letting go of my grip on her, I push her knees up to her chest, as I bring my face closer to hers. “You want to know how much I want you? You sure?” I ask in a taunting tone, since I’ve got her pinned. Literally.

She narrows her eyes at me. “Fine. Don’t tell me. Lick me instead.”

Have you met Lauren Blakely's Men of Rom Com? If you haven't, you're seriously missing out! Blakely's back with her fifth addition to the series, giving us the story of thirty-two-year-old Max Summers and twenty-six-year-old Henley Rose Marlowe. Max was introduced in Full Package as the brother of Chase Summers and he mentions Henley's name once, his reaction being rather intriguing. Max owns Summers Custom Autos, possibly the top custom auto garage in New York, and Henley was his apprentice five years ago, undoubtedly the most talented apprentice he's ever had under him, even as he kept other thoughts of her under him in a completely X-rated kind of way under lock and key. But then he fired her and she made her way to Northern California. Now she's back and she's the lead builder at John Smith Rides, Max's main rival. When they're thrown together by an opportunity to build a car for a television show, there are different kinds of tension between them, with one in particular neither Max nor Henley wants to acknowledge. They bicker and flirt, but they'll have to buckle up for the ride of their lives.

Okay, there were a couple of chapters in the beginning and one somewhere in the latter half of the book that I wasn't a fan of Max's. I swear, the man needed a smack upside the head. But maybe he acted the way he did in the beginning because Henley was, after all, the woman he always wanted but never allowed himself to go after. And then later in the story, he hedges and makes the mistake of not being open and honest. Will men never learn?! Gah! But he wasn't all bad. When he finally learned to relax and enjoy himself with Henley, he really was a nice guy, with moments of sweetness. Of course, Henley is a lot to handle but that's what happens when you're a woman who refuses to be limited by the expectations of others. She's a female in a male-dominated industry, and while she's a tad--a lot--mouthy, she backs it up with her talent for fixing up cars. I thought it was totally sexy when these two were working side by side on the Lamborghini, proving that when they set their issues aside, they were an unbeatable team and that Henley learned a great deal as Max's apprentice but how she also came into her own.

The humor here is probably the most understated among the five novels in the Men of Rom Com series, with a fair bit more angst because of the personal and professional history that exists between the main characters. That isn't to say that the book isn't funny. It lives up to it's being a romantic comedy and there are genuinely hilarious moments in the book. I appreciated the slow burn here, especially because there really were hurt feelings from five years ago and I think having Max and Henley jump into bed too early in the story would have diminished the overall love story. It was also fun to have the other couples from the series, with Chase and Josie taking the lead, of course, since their familial connection to Max and the fact that Chase knew all about what happened when Henley was fired five years prior. We also find out who the next book, Hard Wood, is going to be about and I'm curious to see what kind of shenanigans are in store for fans and readers of the series. Each book can be read as a standalone, but I'm highly recommend you read all the books in order. I'm giving Joy Ride a five-plus-starred rating. ♥