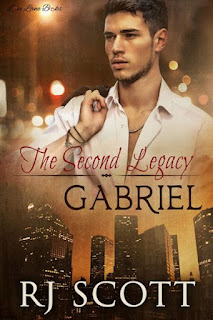 It's been a bit of a wait but the second book in RJ Scott's Legacy Ranch series, which is a spin-off of her popular Texas series, is finally out, and with it comes the story of Gabriel Reyes, one of the survivors of years of abuse at the hands of Hank Castille and his cohorts. He may now be free of Hank, but the nightmares continue to chase him, and even the man who supposedly saved him from the streets has turned out to be more villain than hero, taking advantage of Gabriel's state of mind and using him as a prostitute with a shiny and spiffy shell, even though he's empty on the inside. He does what he's told, hoping to please a man who gets pleasure out of punishing him.

Wealthy hotelier Cameron Stafford isn't as helpless as people seem to think he may be. Yes, he's gay, and yes, he's been slowly but surely losing his eyesight since he was twelve, but his hotel remains the most profitable among all those belonging to their family and he's surrounded himself with a loyal group of people, especially his best friend slash bodyguard. But his status has made him a target of those wanting to take advantage of him, so when a family event comes up, Cam decides booking an escort is the safest route. It's merely a business transaction, except Gabe intrigues him in more ways than one. But will Cam still want Gabriel when he realizes how damaged he actually is?

Gabriel bears the scars--most of them unseen--of his years of abuse at the Bar Five Ranch, and it's clear that he's never really dealt with them, having moved from one abuser to another. It would be easy to tell someone like that to simply move on, but because there are certain things that have been ingrained in his head for so long, he doesn't think he's worthy of redemption nor does he think anyone else will ever want someone like him. There are different kinds of abuse, and it's the ones that aren't physical that are often the most difficult to contend with. I empathized with Gabe as he described what he had to go through, and that's without detailing every single thing.

Cam was an interesting man. He was self-efficient and didn't like being pitied, but he also knew that he had to rely on others in order to not be caught unaware. He's hesitant when it comes to trust, especially since there are members of his family who see him as nothing more than a handicapped gay man incapable of managing his own hotel. I liked his relationship with Six, who is the person closest to him and knows him most, and it was nice seeing that theirs was a purely platonic one for a change. I'm considering this a slow burn love story because it does take a while for them to get to that point. Overall, I enjoyed this second Legacy Ranch read and award Gabriel four stars. ♥

Read my reviews for the Legacy Ranch series: