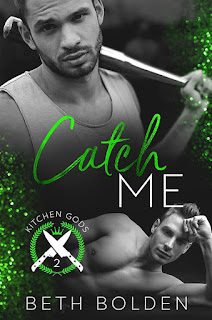 Wyatt Blake may be a talented chef, and he knows that working in a restaurant as lauded as Terroir is a big deal, but staying under the thumb of an ornery top chef and being nothing more than a line chef isn't what Wyatt wants for himself. Accepting a job as a private chef would mean having to move to Los Angeles, but it would also mean more money which would help in caring for his grandmother who's been diagnosed with Alzheimer's. Finding out that his new employer is none other than openly gay professional baseball player Ryan Flores--the same Ryan Flores he hooked up the night before he came face to face with the guy for his job interview--is one thing, but when Ryan later confesses that he'd like Wyatt to pretend to be his boyfriend for the sake of being resigned to the LA Dodgers, Wyatt is at a loss. The extra income would be a good thing, but he isn't out to his grandmother and becoming Ryan's fake boyfriend would definitely turn the spotlight their way. And if Wyatt were truly honest with himself, he would much prefer a real relationship, but Ryan refuses to get his heart caught up in a guy ever again...

Catch Me is the second novel in the Kitchen Gods series by Beth Bolden, which follows a group of four friends, roommates, and aspiring chefs who find love inside and outside of the kitchen. The series got off to a less than stellar start for me, but this second release has allowed it to bounce back. Wyatt and Ryan had a good connection, and did like the fact that Wyatt didn't immediately agree to the whole fake relationship thing. I thought I had understood why Ryan was no longer willing to engage in committed relationships, but the deeper reason behind it did surprise me and made it more interesting. However, can I just say that as much as I liked Wyatt and Ryan together, there were a couple of times where I was tempted to smack Ryan upside the head. I swear, the guy needed to get a clue and quit running away from situations. And then there was that thing he did close to the end. Ugh. He may be a talented baseball player, but he seriously needed to think his decisions through every now and again. Still, I did enjoy the four-starred Catch Me; I'm curious to see where book number three will take readers. ♥

Read my reviews for the Kitchen Gods series:

Bite Me (book one) - three stars - My Review

Catch Me (book two) - four stars - My Review (posted above)

Purchase Catch Me on Amazon.