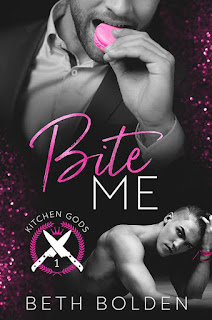 
Bite Me is my first read from Beth Bolden, and it also happens to be the first book in her new Kitchen Gods series, spun off of her Five Points series. The series is about a group of close-knit friends and chefs who deal with the professional and personal ups and downs of their respective lives. The story in book one is about pastry chef Miles Costa. Along with his three roommates and best friends, Miles spends most of him time at a famous restaurant, and while he's appreciative of the opportunity given to him, he can't help but feel bored by the monotony. In order to keep his creative culinary juices flowing, Miles makes videos of himself putting his own personal touch on desserts. When his latest post garners a whole lot of attention--both for the food and the man making it--he's approached by Five Points, a production company known for a number of online video series. This is an opportunity Miles knows could be just what he's been waiting for, but in order to keep his vision for his show, he's going to have to battle wits with his producer, Evan Patterson, who may be a fan of Miles's but not one of desserts.

While the story line held promise, I must confess that the main characters had me beyond frustrated throughout most of the book. There was all this back and forth and all the bickering going on between Miles and Evan that made me wonder if they forgot that they were in a production studio and not on a playground. The one-upmanship between them reminded me of my preschool students years ago when they would get back at one another for something they believed was a slight against them. Sigh. I don't know if the fighting was meant to elicit laughter from the reader, but on my end, I found myself grimacing more often than not. Seriously, these two needed a timeout BADLY. All the fighting took away from what could have been a good enemies-to-lovers story because there was just too much of it going on. I did like Miles, however, and felt that he was a more developed main character compared to Evan. Even though Bite Me did falter and I can only give it three stars, I am curious to find out more about Miles's three best friends and fellow chefs, so I will be checking at least the second book out. ♥

Purchase Bite Me on Amazon.