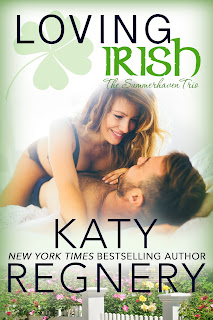 Gah! I feel as if Katy Regnery saved the best Haven triplet's story for last (although there is a novella that's part of the series that's set for release this year!). Ian Haven's addiction to alcohol was something he struggled with in the first two novels. Here in Loving Irish, readers not only find out what led to Ian's overindulgence the first time around and how he battled through his alcoholism and made efforts to redeem himself to those he hurt the most--his parents, his two siblings, and the only girl he's loved and whose heart Ian unintentionally broke a decade ago.

Turning seventeen was a big deal to Halcyon Gilbert. She was spending the summer with her closest friends at Summerhaven Camp, and while she had already given her heart to seventeen-year-old Ian Haven, she wanted to give him her body as well. Instead of making promises to be together forever, Hallie found herself vowing to never having anything to do with Ian again. In turn, Ian's life goes in a direction that he never planned for--a life without Hallie in it. He knows how much he hurt her, but his drinking spirals out of control, and he hurts himself the most.

Ten years and one divorce later, Hallie returns to her family's summer cottage with her five-year-old daughter Jennifer in tow. Their new home is in disrepair and as much as she hates Ian, she knows she'd be silly to turn down his offer of help. She keeps her distance from him, even as she takes note of how Jenny has opened up to Ian. Hallie can't deny how different Ian the man is from Irish the boy, but there are things that have also remained the same--like the way they can't help but be drawn to one another. But she'd be a fool to fall for the guy again...right?

This third and newest Summerhaven book is my favorite (so far). There was some angst but there were also lighthearted moments, and I liked that while we got to see just how much Ian and Hallie loved each other as teens and how that young relationship of theirs fell apart, we also see the journey they take in order to find their way back to one another. There is some overlap in terms of timeline with the second book, but all three novels can be read on their own (but read each one anyway). I'm not only loving Loving Irish, but I'm loving this series! Five stars. ♥

Read my reviews for the Summerhaven series: