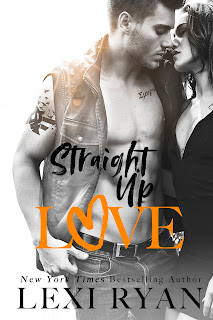 Can I just say I love it when the next book in a series doesn't take what feels like forever to be released? Less than three months after the first Boys of Jackson Harbor novel came out, Lexi Ryan has published the second one! Straight Up Love is the friends-to-lovers story of best friends Jacob Jackson and Ava McKinley. At thirty, Ava's come to a decision: she wants a baby. But Ava isn't in a relationship, her marriage having ended after her husband made her feel like she was a failure when they were unable to conceive and went on to cheat on her. She could go the conventional route and become artificially inseminated, and when her friends recommend she ask Jake to be the donor, Ava bites the bullet. After all, the Jacksons have the kind of genetics anyone would want. When Jake finally warms up to the idea, he has one caveat: that they do the getting pregnant part the old-fashioned way. Maybe this is finally his chance to show Ava that they're perfect for one another, but will Ava still want to be with him once she finds out the one secret Jake's been keeping from her for the past five years?

There was a lot to like about this book! Jake and Ava were really easy-to-like main characters who clearly had a firm friendship that started from when they were much younger. I also didn't expect a lot of their story to play out the way it did, from the revelation of Jake's feelings for Ava to that other revelation that threatened their blossoming romantic relationship. When it came to the latter, I thought it was going to go one way, and then when everything was said and done, I was quite shocked that there were two possible scenarios (and the one I was leaning towards was the same one Jake had considered). Because there are quite a few supporting characters--from Jake's and Ava's immediate families to their circle of friends--there were moments where the story did feel "crowded". The book also felt a wee bit long, almost like it took longer than it should have for Jake and Ava to get their respective acts together AND to actually get together as a couple. Still, I enjoyed the book as a whole, and there were more pluses than those two minuses I mentioned. I'm also now super intrigued as to what awaits certain supporting characters connected to Ava. Four stars go to Straight Up Love. ♥