Review: The Wrong Kind of Love by Lexi Ryan (Boys of Jackson Harbor #1) 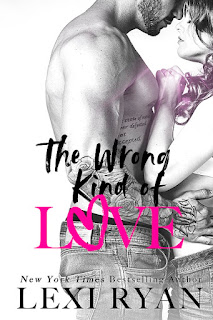 The Wrong Kind of Love is the first novel in bestselling author Lexi Ryan's brand-new Boys of Jackson Harbor series, and it was an unexpected kind of romance novel, and when I say "unexpected", I mean in the best way possible. The aforementioned "boys" in the title are the Jackson brothers--Brayden, Ethan, Jake, Carter, and Levi--who also happen to have a sister named Shay and all of whom adore their mother and miss their late father. They live in a town called Jackson Harbor in the state of Michigan, and their a close brood, one that would do anything and everything for each other. The series kicks off with the story of thirty-three-year-old Ethan, a widower and single father to six-year-old Lilly and an obstetrician, who is still mourning the loss of his wife but finds love nonetheless.

While he's teased by his siblings for supposedly being celibate, Ethan knows telling them he has occasional hook-ups wouldn't help his case much. After all, he hasn't really moved on since his wife died, but then doing so would require him to accept the realities of her death, and it's something he's barely shared with anyone. But his family being who they are, Ethan decides to take his mother Kathleen's suggestion of hiring a nanny, one handpicked by Kathleen herself. Veronica Maddox is more than qualifies, and when she meets Lilly, they click straightaway. Ethan is another matter, though. He's at a loss as to how to deal with her presence because the twenty-four-year-old nanny Lilly loves is the same girl he hooked up with at a bar--the girl he can't stop thinking about. What Ethan doesn't know, however, is that Nic isn't actually Veronica; she's Nicole, runaway bride and twin sister to Veronica.

Secrets tend to be game changers, and so I'm pretty sure you won't be surprised that the secrets that both Nic and Ethan are keeping from each other--and these are heavy-duty secrets--have the power to break more than just their own hearts. Nic's secrets are on display for the reader; Ethan's not as much, although figuring out the biggest secret isn't all that difficult. Waiting to see how everything will unravel and how it affects their blossoming romance is part of what made this series starter such a great read. There's also the whole back and forth between our main characters, both wary because of the hookup AND the continuing attraction between them, an attraction that they know they shouldn't explore given that he's her employer and she's his daughter's nanny, plus all the secrets between them. The happy ending is the kind that's guaranteed, but damn if Lexi Ryan didn't make the journey getting there a very entertaining one. The Wrong Kind of Love gets 4.5 stars and I can't wait for book two. ♥