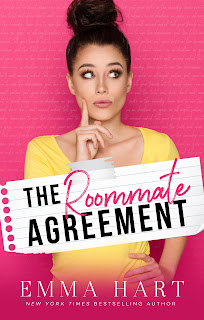 Emma Hart has another winner with her newest romantic comedy release, The Roommate Agreement, and it employs one of my all-time favorite tropes to boot! All it took was punching a bully for Shelby Daniels and Jay Cooper to become the best of friends in the fourth grade, but it's a friendship's tested once they become roommates. Now in their mid-twenties, Shelby and Jay are responsible adults, or at least that's what Shelby thought until she had to experience just how much Jay failed to pick up after himself or to perform household tasks. The last thing she wants to do is to have to kick him out, so why not come up with an agreement--a set of rules that they'll both have to agree and abide to. Life in the same home should be much easier going forward. But nothing is ever simple about falling in love with your best friend.

Jay and Shelby were a hoot! These two had the sort of genuine friendship based on years of history, and yes, what they have is purely platonic, but neither one is blind to just how attractive their best friend happens to be. What's a mutual crush between friends, right? Ah, that's where the complication comes in, and Emma Hart does a fabulous job with the evolution of Jay and Shelby's friendship into more, without forcing nor rushing it. The whole Oreos issue made me laugh--hey, I've been known to go into bitch mode when a sibling or a friend has horned in on my snack stash without telling me--and then the list of rules these two besties came up with. The banter was easy-going and fun to read, and the romance was sweet interspersed with numerous silly and hilarious moments. I'm awarding The Roommate Agreement 4.5 stars. ♥