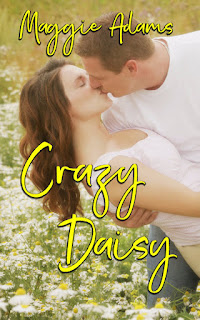 Maggie Adams is a new-to-me author and my introduction to her writing came by way of a novella entitled Crazy Daisy. The titular character is a widow and single mother named Daisy Jones living in a small town called Watertown and is the local veterinarian. She's been called "crazy" because she was vocal about what she considered the lack of proper medical care and treatment that veterans were failing to get from the government, having been a witness to how that impacted her late husband who was suffering from post-traumatic stress disorder. A couple of years after he took his own life, someone from her past makes a return--Gideon McElroy, a war veteran as well whose scars are more physical and has chosen to be a hermit in his family home with the former military dog that he was partnered with. All she wants is to make him feel welcome and to let him know he still has a friend in her; all he wants is to be left alone. When his dog's life is in danger, Gideon knows he only has one person he can turn to: Crazy Daisy. Could this be Daisy's chance for her teenage crush become the real thing?

This novella had a blurb that caught my interest and I had hopes for it; alas, it fell quite short of my expectations. There's a lot that happens in the limited number of pages that the book has, but majority of it involves more of the author telling me what was happening than actually showing me what the characters were going through. I wish there had been an opportunity to really see how Gideon's relationship with Daisy wasn't merely based on the physical since a lot of what was being shown had to do with them having sex, and I really wanted to see how Gideon would build a firmer bond with Daisy's daughter, Poppy. There's also a point in the story where Daisy proclaims that Gideon didn't suffer from PTSD, but how would she have known that? Because he didn't suffer from the same symptoms as her husband? The blurb also states she was in love with Gideon for years, but it didn't feel that way at all. A crush is very different from being in love with someone. There was also skipping of years going on, leading to missed opportunities to delve deeper rather than skim over milestones. Crazy Daisy snags 2.5 stars. ♥