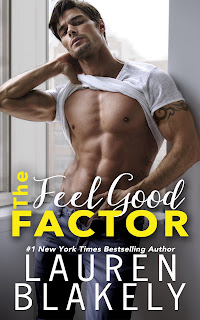 “Let's get one thing straight,” he growls. “What this is? It's not attraction. It's stronger. More intense. It's red-hot fucking desire. It's raw and it's carnal, and it's so much dirtier than attraction.”


Lauren Blakely's newest book is entitled The Feel Good Factor, and boy does it deliver on its promise because I certainly felt oh-so-good while reading it. Loosely connected to Blakely's two earlier releases--Unzipped and Best Laid Plans--this romantic comedy novel can still be read as a standalone (though those two other books I mentioned are awesome so read them anyway!). If you're a Blakely fan like me, then you know just how undeniably hot her male main characters tend to be, but Derek McBride burns them all to ash with his hotness factor. He's downright dirty and delectable. Oh, and Perri Keating? Now there's a female main character who embraces her sexual side with gusto because the days of shaming a woman who likes sex should be totally extinct.

When thirty-one-year-old Derek McBride gets pulled over by a gorgeous redheaded police officer for speeding on his bike, he's thankful he gets off with a warning but wishes he could have gotten off in a whole different way with her instead. But then now living and working in a small town like Lucky Falls almost guaranteed that Derek would cross paths again with thirty-year-old Perri Keating. There was a whole lot of lust at first sight coming from Derek's end, and Perri's flirtatious nature seems to confirm that it was very much mutual. They'd be a shoo-in for the kissing competition that would earn Perri bonus points with her boss as she aims to snag a promotion. Then her brother brings the new renter he's found: the EMT working at the same fire station, Derek. There's no way they could cross that line and neither wants a relationship, no matter how good they may make each other feel. Right?

This book is easily one of my top three Lauren Blakely reads. It was fun and flirty and filthy, and I enjoyed the heck out of it. That doesn't mean, though, that Blakely's other rom-com books weren't any of those things. They were, but Derek and Perri took it to a whole new level. I swear, these two had the sort of chemistry that simply couldn't be contained no matter how much they tried to. They did, however, manage to also establish an honest-to-goodness friendship between them as they went all-out pretending they could merely be friends and nothing more. Having the supporting characters around them brought out other aspects to their respective personalities that made it clear that what was brewing between them was more than just lust. Speaking of the supporting cast, can I just say that I'm glad I preordered Nobody Does It Better because I can't wait to read THAT rom-com. But first I'm giving my favorite awesome twosome that is Perri and Derek and all things The Feel Good Factor five-plus stars. ♥

Read my reviews for the Lucky in Love series: