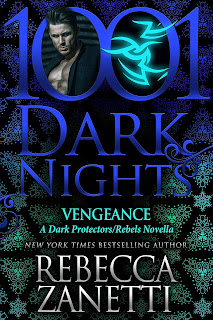 Bestselling author Rebecca Zanetti takes readers back into the world that her Dark Protectors series basks in with a new novella as part of the 1001 Dark Nights collection. Noah Siosal is a vampire solider with revenge on his mind. He's hell-bent on finding his brother's killer, and he doesn't care who gets in his way. He's circled the globe, and the last place he expects his search to lead him to is an anger management group. Who the hell wants to be surrounded by humans swapping sob stories and seeking redemption and absolution? And then his attention is captured by one human in particular: Abby Miller. To have suffered all the abuse at the hands of her ex and then to be accused of attacking him unprovoked doesn't seem fair. But she'll make good use of her plea bargain--she'll learn to defend herself. Noah steps up and offers his protection, but Abby finds she would rather he offer his heart.

The Dark Protectors series is a favorite among quite a few paranormal romance readers, and Rebecca Zanetti definitely offers up a great addition to it. As always, this was a fast-paced read, complete with everything that we've come to expect from the series and the author herself. If you've never read any of the books in the series, you could jump into this novella without feeling too lost, although I am highly recommending you check the earlier books out because they do make for highly entertaining--and addictive!--reads. I loved that dizzying chemistry between Noah and Abby, and the transition they make as separate individuals to two people who find love, trust, and support once their paths cross never felt rushed even though this was novella in length. With romance and action and a whole lot of that patented Dark Protectors goodness, Vengeance left me very much satisfied. 4.5 stars. ♥