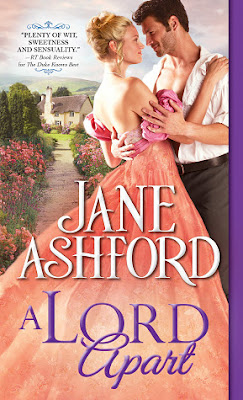 About A Lord Apart
Family secrets, an unlikely alliance―and a love neither expected...

After his parents' sudden death, Daniel Frith, Viscount Whitfield, is struggling to unravel a web of chaotic family records. He is astonished to learn his father's will contains a mysterious legacy: a house left to a complete stranger. He knows nothing about the beautiful Penelope Pendleton and he's not sure he wants to...until she turns out to be a whiz at all those nasty tasks involved in estate administration...

Penelope has no idea why Rose Cottage was left to her. But it's a godsend after her brother's reckless actions disgraced her family. She had planned to stay out of Viscount Whitfield's way, not grow ever closer to him. But when they discover how entwined their families really are, Daniel and Penelope must collaborate to avoid a scandal that reaches much higher than they could have guessed...

Add A Lord Apart on Goodreads.

An Excerpt from A Lord Apart
“Miss Pendleton might be interested in your estate records,” said Macklin.

Daniel frowned at him. He didn’t want to show her that jumble. She’d think it a shambles. And she would be right.
“Oh, do you have anything about Rose Cottage?” she replied.

“Whitfield’s been searching, but he hasn’t found anything yet,” said the earl.

“Perhaps I could help. I used to manage—” She stopped abruptly, her cheeks reddening.

“Ah,” came to the tip of Daniel’s tongue. But he managed not to say it. She used to manage what? He couldn’t resist trying to find out. “Come and see,” he said. With a bow, he escorted her along a corridor to the estate office. Only when they reached it did he notice that Macklin hadn’t followed. Fleetingly, he wondered if the older man was up to something. But Miss Pendleton’s exclamation of “Oh my,” chased the idea from his mind.

Inside the office, his visitor was standing still, surveying the masses of papers. “I’m not sure I understand your method of organization,” she said.

Because there wasn’t any, Daniel thought. As anyone could see. She didn’t need to make a point of it. “Our agent left some months ago,” he said.

Miss Pendleton walked over to the desk. She eyed the stacks of documents with an odd expression. She looked…avid? At once, Daniel dismissed this inadequate word. She looked like a drunkard gazing at a foaming pint. She looked like a sheepdog vibrating with the need to herd. Her fingers flexed. She wanted to plunge her hands into his papers, he realized. She wanted to wrest information from their pages like a falcon tearing into a mouse. Why had he ever thought her wan and sylphlike? “Perhaps you could help me look through things,” he said.

She turned to him. Daniel was shaken by the flare of excitement in her blue eyes. How had he missed the fierce spirit inhabiting that slender body? And what might a man do to have that look directed at him? “There must be information about Rose Cottage here somewhere,” she said. Her fingers twitched again.

It took him a moment to find his voice. “We might look for it together.” From the way her gaze raked him, Daniel felt as if he’d suggested a far more intimate activity. Suddenly his piles of papers seemed less of a burden. “I would appreciate your assistance,” he added. “You seem as if you might know your way about a records room.”

“I do.” Two murmured words, yet full of longing and melancholy.

The quick rise and fall of her breath under the bodice of her gown was very distracting. Had she agreed or not? Her eyes burned. Daniel wanted to know what lay behind them. Would joy bloom there as fiercely as this present emotion? She stood very still, her fists closed at her sides. The work of sorting would be an altogether different matter with her at his side. “Our two families must have some connection,” he said. “Or communication between them, at least. How else to explain the legacy?”

Miss Pendleton looked away, and he cursed himself for mentioning families. She’d made it clear she didn’t want to talk about hers.

She muttered something. It might have been, “They’ll find out anyway.” If that had made any sense.

“I beg your pardon?” said Daniel.

When she turned back to him, the fire had disappeared from her blue eyes. They’d gone bleak. “Haven’t you made inquiries about me?”

He could see she hated the idea, and he wished he could deny it. Excuses crowded his mind, but none seemed persuasive in this moment, when his chief desire was to lure that fierce, vivid woman back into the light. He started to say that they’d heard nothing as yet. But she spoke again before he could.

Daniel felt as if he was groping his way through a pitch-black landscape. “Macklin knows a great many people,” he admitted.

“I’m sure he does. I suppose he’s a great friend of Lord Sidmouth.”

“The Home Secretary?” Where had that venom come from? And what did a government minister have to do with anything? Daniel looked for something to say, anything that might end the struggle racking her. But nothing occurred to him. Perhaps because her cheeks had flushed, and her chest continued to rise and fall in a way that compelled his attention. He had to keep tearing his gaze away.

Miss Pendleton’s breath sighed out. Her shoulders slumped. “Oh, what difference does it make?” Her tone was angry and impatient. “It’s only a matter of time until you find out. I don’t know why I thought I could keep secrets.”

Jane Ashford discovered Georgette Heyer in junior high school and was captivated by the glittering world and witty language of Regency England. That delight was part of what led her to study English literature and travel widely. She’s written historical and contemporary romances, and her books have been published all over Europe as well as in the United States. Jane has been nominated for a Career Achievement Award by RT Book Reviews.