Review: While I Was Away by Stylo Fantôme 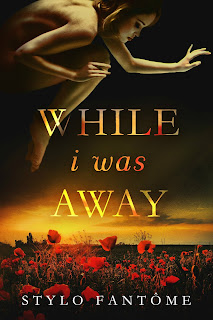 Except he's not a stranger, he's your soulmate, only he's forgotten that, and what could possibly be worse than that?

This book was unexpected in all the best ways possible. I've read quite a few of Stylo Fantôme's books, but her latest one is, without a doubt, the most unique story she's penned that I've had the privilege of reading. While I Was Away has Adele Reins as its main female character, but there is more than one story that unfolds among the pages of this novel. I know that may sound confusing, and I promise that I'm not intentionally trying to mess with your head, but see, I can't really give a whole lot of the story away without risking spoiling it for those of you who have yet to read it. The story here involved not just Adele but her family and others who were nearest and dearest to her heart. Part of it happens while Adele is in a coma after suffering a devastating accident, and while those around her try to come to grips with what's happened and carry the burden of guilt and responsibility on their shoulders, Adele is living a life unfamiliar to the one she had while she was awake. She shares her journey with a companion named Jones, and as he changes her life while in a coma, what happens if and when Adele wakes up?

There was something almost ethereal in the way the author presented this book. It also felt like more than a romance. What do I mean by that? Well, there is a love story--actually, there's more than one love story, but I'll leave it at that--but I guess the best way to describe this is that it was literary journey, one that the characters took us on and we, in turn as readers, experienced everything they did. There wasn't a single main or supporting character that I felt was useless or had no bearing to this tale. I love it when an author doesn't overdo their novels--like throwing anything they can thinking it'll beef up whatever they're writing but instead everything becomes muddled. Stylo Fantôme has already proven herself to be a more than capable writer, but with While I Was Away, it's as if she pushed beyond her limits and gave readers her best work to date, which easily garners five-plus stars. ♥

Purchase While I Was Away on Amazon.