Review: The Coincidence by Felice Stevens 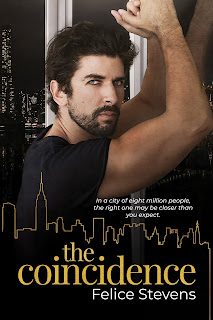 Felice Stevens's latest standalone novel has easily become one of my all-time favorite releases from her, delivering a beautifully written slow-burn romance and a story about family, fate, and falling in love. The Coincidence introduces readers to two thirty-year-olds: Barney's personal shopper Jacob "Coby" Epstein who is two months past his last relationship which ended with a disinterested boyfriend who cheated on him and Eli Kaplan who is a former member of the National Guard who is now a court officer with the Brooklyn Supreme Court and is coming to terms with his sexuality. Online dating hasn't been all that great for Coby, with one terrible first date after another, and then his best friend, Addie, decides to help him out in a way that leads to a coffee date with Eli, a guy who has never tried online dating before and has never, ever been with another man. When the two men discover that they actually live in the same apartment building, it may be more coincidence than kismet, but when the ties between their families come to light, it may be the sort of fate that could right the wrongs of their family histories.

I love stories that are outside the norm. I don't expect groundbreaking reads every single time I crack open a new book; I'm more than happy with the personal creative touches an author can bring to a well-worn trope or sub-genre and make it their own. Felice Stevens's stories about her beloved state of New York have me even more intent on visiting it one of these days. She always manages to make me see just how enticing that mix of grit and grand in one of the most diverse places in the United States, and in her new story, having two men find each other living in the same building and being connected in the most fascinating of ways had me utterly enthralled. This story was a prime example of how a slow-burn romance is executed well. I got to know both Coby and Eli and their backgrounds before focusing on the two of them as a potential couple and how everything combined could be oddly complicated, i.e. family histories and dynamics, and simple, i.e. their feelings for each other. Stevens's novel highlights that it's never too late to see and rectify the errors of our ways and to hold on to the things that are true and matter most. This was, hands down, one of this author's best written novels. The Coincidence snags five stars. ♥

Purchase The Coincidence on Amazon.