Review: Turning Out by Serene Franklin 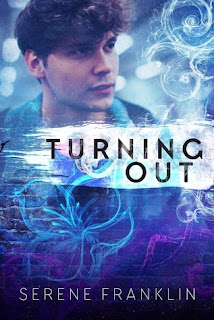 After a notable debut release in November of last year, Serene Franklin is back with her sophomore offering. Turning Out is a companion novel to her first book, Spread, and this gives readers James Rey's story. James is none other than Jaime, Theo Ray's younger brother. Here, he's a twenty-six-year-old medical student who's leading a pretty cushy life, thanks in large part to coming from an extremely well-off family. He idolizes his older brother, loves his mother, and enjoys hanging out with his core group of closest friends. When he sees how in love and at peace Theo is with his boyfriend, Masa Kuroki, Jamie wonders if it's time to end his non-commitment ways. He also thinks it may be worth exploring his bisexuality that he's kept under wraps for years. An encounter at a house party with a hot stranger has Jamie wishing for more, and bumping into the guy again seems like kismet. Gus is thirty-two, gay, and is rather mysterious, but Jamie is smitten and it looks to be mutual. They quickly fall into a relationship, but Gus is still keeping secrets and they could be the sort that may very well send Jamie running away.

I quite liked Serene Franklin's second novel! I had a feeling Jamie would do well as a main character, and boy, did he have a story to share with readers. He's far more open personality-wise than his brother, with a sunny personality and a penchant for filter-less musings and ramblings. However, that didn't mean that he didn't have his own share of worries, that being his bisexuality, but it didn't have as much to do with telling those he cared about and more to do with how to go about exploring it. So, compared to its predecessor, this story had far less angst and drama and its main character more so. The twist regarding Gus was one that I pretty much saw coming from the moment one name was mentioned by one of the supporting characters followed by Gus's appearance several pages later. I thought I had it wrong based on the whole name thing, but was proven right with all the clues I picked up on. That didn't mean that the revelation was a disappointment; the exact opposite actually, and it was just one of many lighthearted and fun-filled moments in this wholly entertaining read. Turning Out snags four stars. ♥

Purchase Turning Out on Amazon.