Review: It's in His Forever by Shelly Alexander (Red River Valley #5) 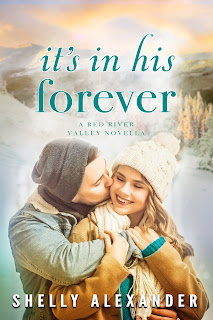 Shelly Alexander is back in Red River Valley with the fifth book in her beloved series. It's in His Forever is a novella that features the most requested guy to get a happily-ever-after, Langston Brooks. Contrary to popular belief, Red River's most eligible bachelor has actually already met the love of his life, but the flight medic's been keeping her identity a secret for a decade. Since they were back in high school, his heart has only belonged to Sandra Edwards, but while he wants forever with her, she isn't too keen on it. All Sandra wants to do is leave Red River and move on with her life, and it's a life that's been overshadowed by gossip and assumptions. She cares about Langston too much to saddle him with all her baggage, but Langston's done with keeping his feelings secrets. This time around, he wants forever, and he's going to show Sandra that she deserves to have her own forever with the guy she loves?

This was a quick but sweet read, although I admit that the format of the advanced reader copy (ARC) I received was wonky, which makes me wonder if it happened while converting the original format to mobi for Kindle. Wonky formatting aside, the author has scored another winner with this fifth--and final?--book in what's been a satisfying series to read and fall in love with. Langston was such an easy guy to love, and you could tell just how much he loved Sandra, even when she was actively pushing him away and trying to convince him that she had no feelings for him whatsoever. Now, Sandra was a woman who had walls and she had her reasons for being as distant and closed off as she was. My heart broke for her once we get a peek at the person she really was. I do wish this had been longer so that we could've delved deeper into the characters, but I still enjoyed It's in His Forever. Four stars. ♥

Purchase It's in His Forever on Amazon.