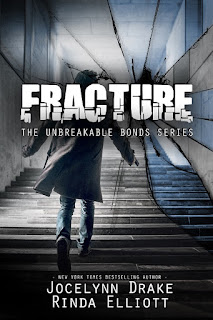 If this was life with the general, then he'd happily take it. He'd embrace the insanity, explosions, and danger if it meant that at the end of it all, he was able to crawl into bed with Snow and wrap his body around his lover's.

I can never get enough of Jocelynn Drake and Rinda Elliott's writing, having fallen in love with their books in not one, not two, but three series. So, of course, when I heard they were going to release a sixth full-length novel in the series that started it all--Unbreakable Bonds, for those of you who have yet to dive into all that awesomeness--there wasn't any inkling of doubt that I would be reading Fracture. (Side note: I've read all of Drake and Elliott's work as a writing duo, but I have yet to read their stuff as solo authors, a misstep I hope to rectify this year!) While it IS possible to read this book as a standalone, I do think it would be best to read the series in order because of the recurring characters and the individual histories plus the respective love stories of each couple gives readers a better idea of why they're all as close-knit as they are.

Ashton Frost and Jude Torres have been together for three years and are still very much in love and in lust with each other. They're happy and healthy and are committed to one another. They've weathered their fair share of storms, but nothing quite compares to the tsunami of trouble that's about to hit them once Jude receives a phone call regarding his youngest brother, Jordan. Beaten, shot, and left for dead, Jude's brother is barely hanging on, and Jude desperately needs to find out what happened to the young man he thought he knew. The bits and pieces they learn are dragging Snow and Jude into a world that Snow is somewhat familiar with, but even he is taken aback once they find out what Jordan went through. But now, someone has caught on to their investigating, and Snow's and Jude's lives are in danger. In order to unmask the villain before it's too late, Snow and Jude will need to lean on those who have their backs: their family.

This book is as packed with romance, sex, action, and suspense as all the books in the series before it. And the snark--let's not forget about the snark because I'm rather addicted to the whole back and forth snark exchange that goes on among these eight men who have become their own family--Snow and Jude, Lucas and Andrei, Ward and Noah, and Ian and Hollis--plus the people who make up Ward Security (but that's a whole 'nother obsession, erm, addiction, uh, animal). There were lighthearted moments, indeed, but most of this book had a heavier feel to it. I'd also like to point out that there is one particular portion of the book that contains potential triggers, i.e. sexual and physical assault, so consider yourself forewarned. That being said, this was a rather emotional story, at least as far as I was concerned. I loved that in spite of everything they faced, Snow and Jude's love for each other and their family always prevailed. Jocelynn Drake and Rinda Elliott have yet to disappoint, and I can't wait for more from these two. Five-plus stars go to Fracture. ♥