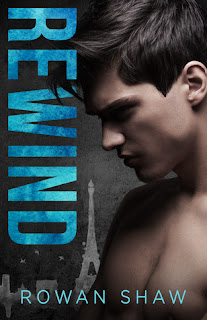 Rewind is the debut novel of Rowan Shaw, and this second-chance romance proved to be a good read with a fair amount of angst to it. Florian Beaudry and Enzo Chevalier were once very much in love, but when they’re viciously attacked after kissing in public, Enzo ends up not just losing his hearing completely but the boy he loved after Florian leaves. Eight years pass and both Florian and Enzo have gone on to be in different relationships, both summarily ending after their respective partners cheat on them. So, when their paths finally cross again, it’s as if a new opportunity for them to see if the emotions they once shared are still there. But letting go of all their baggage and past isn’t easy, not when their exes linger and unresolved issues haunting them.

The line between the protagonists and the antagonists is very clearly defined in this book, save for maybe one supporting character but then nothing this character could have done would have been redeeming in my eyes. Florian and Enzo had the sort of love for one another that was worth giving another shot at, even though their separation didn’t exactly paint Florian in the best light. Their exes were…ugh…I wish I could come up with a word that didn’t sound too terrible, but fine, let’s go with that—they were terrible, equally selfish: self-serving and self-absorbed. It bears repeating: ugh. But the rest of the supporting characters were definitely interesting, enough that I wouldn’t say no to getting to know them even more as the series moves forward. Rewind receives four stars. ♥