Review: A Lesson in Thorns by Sierra Simone (Thornchapel #1) 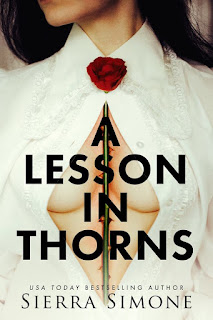 I'm a pervy little sex monster, and the ritual described in this old book is exactly the type of thing I'm hardwired to find delicious. Being bathed and groomed and robed, married to a tall stranger by firelight and then claimed in front of everyone—

It's not going to be you.


I went into A Lesson in Thorns for one reason and one reason only: Sierra Simone. She's one of those authors whose name alone on the cover has many a-reader eager to get their hands on whatever she's releasing as soon as possible. There are expectations when it comes to authors like these--authors like Sierra Simone--because you're so familiar with what and how they write. When it comes to Simone's Thornchapel series starter, however, she didn't merely meet said expectations--she obliterated them. The start of book one was like a whisper beckoning me to come closer, that doing so would be oh-so-worth it, and by the time I got to the end, I felt utterly gobsmacked in the most delicious way possible. This is unlike anything Simone has ever written, and it was so epic.

We're introduced to six children walking through a maze, but instead of ending up lost, they find something and come together in a way that binds them even as they go their separate ways. Twelve years later, the arrival of a now-twenty-two-year-old American librarian nicknamed Poe on the grounds of Thornchapel marks the return of the six: the heir, the dreamer, the priest, the genius, the socialite, and the saint--Auden Guest, Prosperina Markham, Becket Hess, Delphine Dansey, Rebecca Quartey, and St. Sebastian Martinez. They're older and while some have kept in touch, others haven't. Now together for the first time in twelve years, the thorns that surround them will unleash pain and pleasure and the fulfillment of a promise is at hand, but will anyone leave unscathed?

I wish I had the right set of words to describe how extraordinary this book is and why I think it deserves the attention of readers who are not yet privy to its stunning story and characters. I can't really give more than what I've already mentioned away. I believe this is the sort of book that needs to be experienced firsthand, allowing the reader to fully immerse themselves in all things Thornchapel. If you think reading the author's previous work will have prepared you for this book, think again. This book is just the first in a planned trilogy, and yes, it does end in a cliffhanger that will raise questions to be added to those that you may probably form while reading. The second book isn't due until June, and I find myself both frustrated and eager for it. Five-plus stars go to A Lesson in Thorns. ♥