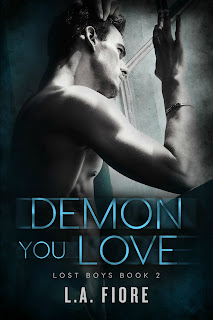 Demon You Love is the second novel in the Lost Boys series penned by L.A. Fiore, and dare I say that this could possibly be even better than the first one, Devil You Know. This is the story of Anton Scalene, born into a hell that he was forced to continue living in for too many years. When he was only fifteen, he took a life in order to survive, but he swore that he wanted to do more than merely survive. He wanted to get out from the world that he knew and become a success. Years pass, and while Anton does achieve his goals, he still finds himself alone, without anyone to share his life with, but maybe it's better that way. There's a darkness that surrounds and is within him. Then he sees Piper Olson. She's the glimmering light that his soul craves and his heart reaches out to. But a man like him can't have a woman like her, not if he wants to protect him from the very past that he tried to put behind him and is now seeking to destroy the future he hoped to have with Piper. Anton knows he needs to let her go, but can Piper hold on to him even tighter? Can Anton's angel show him that even a demon like him can have their pie and relish in savoring it, too?

Prior to reading the two currently available books in the Lost Boys series, I had only read one L.A. Fiore novel--her standalone from the same time last year, Our Unscripted Story, which I was a huge fan of. Devil You Know was a great series starter, with every bit of that angst that I love, and now, after having read Demon You Love, I've come to realize that I should have been reading more of FIore's books before in order to get my angst fix! Yes, this was an angsty read, but it's the sort of angst that a history as heartrending as the one Anton simply has. None of it is thrown in just to create drama. Anton was a male main character who fascinated me because growing up the way he did, there was a myriad of ways it could have turned out even worse for him as he grow older. He survived and then he strove to be and have better. As for Piper, well, she's a female main character after my own heart. No, she isn't perfect, but she's real and she isn't one to allow others to use and abuse her. I so loved these two! Demon You Love may have been about a boy who was lost but it was also about a man who found love and redemption along the way. Five stars. ♥

Purchase Demon You Love on Amazon.