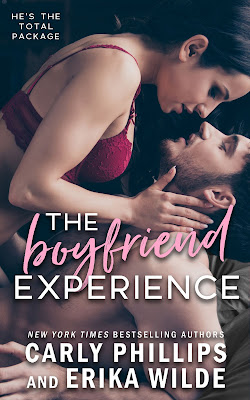 About The Boyfriend Experience
He’s the total package.
Except …

Eric Miller isn’t looking for a long term relationship. And he definitely isn’t thrilled when a friend signs him up for The Boyfriend Experience app behind his back. It’s not like he has a problem getting women on his own. But when he gets a notification that someone is in need of his ... services, he’s intrigued enough to check out her profile and can’t resist the sexy, sassy little brunette who only wants him as a decoy for a family event.

Evie Bennett needs a boyfriend, stat. Someone who can accompany her to her family reunion so she doesn't have to explain that she's been recently dumped. Again. She’s perfectly happy being an independent woman, but what’s a girl to do when her new fake boyfriend starts to feel like the real deal?

Read my five-starred review of The Boyfriend Experience.

Add The Boyfriend Experience on Goodreads. 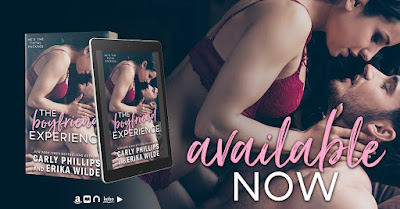 An Excerpt from The Boyfriend Experience
They joined the short line in front of the register, and Eric glanced from the billboard listing all the fancy beverages, to Evie. “What would you like?”

“Come on, you can do better than that,” he teased. “You don’t strike me as being that boring.”

She raised a brow, a glimmer of amusement dancing in her eyes. “You’ve come to that conclusion in the two minutes of meeting me?”

“Am I wrong?” he challenged light-heartedly.

“No,” she admitted, a smile tugging at the corner of her very kissable mouth. “I just don’t treat myself to a fancy cup of coffee very often. Normally, I’m too rushed in the morning to indulge myself.”

They took another step forward in line. “Lucky for you, it’s my treat and I insist you indulge.”

She tipped her head, drawing his gaze to the soft tumble of hair falling over her shoulder and how the ends curled right at the upper swell of her breast. “Shouldn’t I be paying for this, considering the circumstances?”

“Absolutely not,” he replied adamantly, forcibly keeping his gaze on her face instead of her chest. “What boyfriend worth his salt would let his girl pay?”

“I haven’t hired you yet,” she reminded him cheekily.

He grinned. He wasn’t expecting Evie Bennett to be so impudent, and surprise, surprise, he was definitely enjoying their banter, and her. “True.  Which means I really need to step up my game and impress you.”

And honestly, when was the last time he’d wanted to make such an effort with the opposite sex? The answer to that eluded him, because truthfully, he couldn’t remember being so fascinated and attracted to a woman beyond her physical features. Yet there was no denying that Evie’s feisty disposition drew him in and made him want to learn more about her. Which he needed to do anyways, if she was going to hire him. And make no mistake, they weren’t parting ways until he’d sealed the deal, because she was in the market for a temporary boyfriend, and like his campy bio had promised, he aimed to please.

“What can I get for the two of you?” the barista asked, pulling Eric’s thoughts, and attention, to the girl waiting for their order.

He glanced at Evie. “Don’t disappoint me,” he said humorously, referencing the boring cup of coffee she’d mentioned.

A cute, daring smile flitted across her mouth before she looked back at the barista. “I’ll take a white chocolate mocha with an extra shot of espresso and whipped cream.”

Damn. Was it crazy that he was totally turned on by the fact that she hadn’t ordered one of those ridiculous skinny, non-fat, sugar-free lattes that made a mockery of a designer coffee? This was not a girl who’d opt for a salad if she was offered a burger or pizza, and thank God for that. His attraction to her just increased ten-fold. 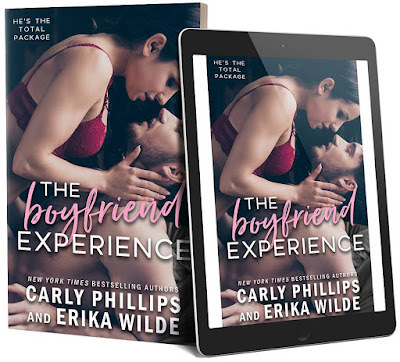 Erika lives in Oregon with her husband and two daughters, and when she's not writing you can find her exploring the beautiful Pacific Northwest.