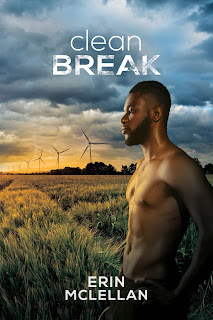 I was not going to sleep with Connor Blume. We were not friends. We were make-out buddies who were incapable of having a real conversation.

Repeat ad nauseam until the end of time.

There's always a danger of sorts when an author's debut release manages to leave you enormously impressed. Whatever is released next is judged based on the standards set by that debut novel, but when it turns out that the debut novel was also a series starter? Well, then it basically lays the groundwork on which the other books are put upon. Erin McLellan's Controlled Burn was one of my favorite debuts of 2017, and when I found out that she was going to release a second book in the now titled Farm College series, I was anxious. I loved Joel Smith and Paulie McPherson's story, so Travis Bradford and Connor Blume had huge shoes to fill, and fill them they did with the release of McLellan's second Farm College novel, Clean Break. This can be read as a standalone, what with a different couple, but since Joel and Paulie also appear here and it's a personal favorite, I'm highly recommending it.

There are two things that Travis Bradford and Connor Blume have in common: they're both seniors in Farm College and they both hated each other. When they end up becoming class partners in Entomology 101, the limited interaction and barely masked dislike ends up with them sharing one hot kissing encounter in a storage closet, and it's an encounter that's repeated more than once. Travis is becoming addicted to his secret make-out sessions with Connor, but he can't afford to get attached, not when Travis is headed to law school and wants to leave Elkville, Oklahoma after graduation and Connor is set to take over managing his family's businesses and will be stuck in Elkville forever. So, becoming physically involved was one thing, getting emotionally was a definite no-go, especially if they wanted to spare each other broken hearts. A clean break was best by graduation...or maybe new life plans.

This book had angst and wit and diversity and love and lust and everything I wish for in the romance novels I read. Kudos to the author for having two complex main characters and how their backgrounds aren't cookie-cutter. I loved seeing Travis and Connor's relationship go from barely speaking to hostile hookups to kinda-sorta-maybe friends with benefits to so much more than they could have prepared themselves for. I saw parts of myself in Connor, which made it easy for me to connect with him, but I adored Travis and how he tried to resist Connor for as long as he did only to still fall for him anyway. As always, they had a great set of supporting characters around them, and I'm really hoping that we haven't seen the last of a few of them yet. Erin McKellan impressed me with Controlled Burn, and she's aptly repeated that feat with Clean Break. This 2019 favorite earns itself five-plus stars. ♥

Read my reviews for the Farm College series: