Book Spotlight: In Her Sights by Katie Ruggle 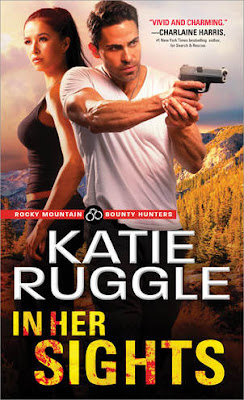 About In Her Sights
Five bounty-hunting sisters
Deep in the heart of the Rockies
Fighting to save each other
...and the men who steal their hearts

Bounty hunter Molly Pax fought hard for everything she has, turning the bail recovery business she shares with her sisters into an unqualified success. So when their sticky-fingered mother jumps bail and puts the childhood home up as collateral, Molly's horrified. To make matters worse, every two-bit criminal in the Rockies now sees her family's misfortune as their next big break.

Enter rival bounty hunter John Carmondy: six feet of pure trouble, with a cocky grin to match. John's the most cheerfully, annoyingly gorgeous frenemy Molly's ever had the pleasure of defeating...and he may be her only hope of making it out of this mess alive.

Add In Her Sights on Goodreads.

An Excerpt from In Her Sights
The chilly air brushed against her damp face, making her realize how warm the bar was. She peered down the dim alley, checking both directions. Except for the dumpster that she’d warned John about, the narrow lane was empty. Frustration rose in her chest, squeezing her lungs. Sonny’d had too much time to get away. The crowd had succeeded in giving him enough of a head start to escape. Without a direction, Molly knew they had no hope of finding him.

John made an irritated sound, and Molly turned to meet his gaze. “I know. It sucks. At least we know he hasn’t left town…yet. Should we go back and see what we can pry out of the zombies? Someone has to know where he’s been crashing.”

He looked unhappy about this idea. “That’s a pretty hostile bunch. You shouldn’t go back in there.”

Although a big part of her bristled at the implication that she couldn’t take care of herself, an even bigger part was relieved. She didn’t want to question the bar patrons, and John was giving her an out. She’d be an idiot to insist on endangering them for a slight chance that someone in the crowd was willing to talk.

Letting out a disappointed huff of air, she stepped into the alley. When John didn’t immediately follow, she turned to raise a questioning eyebrow. “You weren’t planning on staying, were you?” Her stomach churned with concern at the thought of him alone in Dutch’s. Sure, he was a strong guy, but even he couldn’t fight off dozens of people if they meant him harm. Who knew how many were armed, too. The bouncer hadn’t checked the two of them for weapons, and they weren’t even regulars.

“No.” John finally followed her out, and she released the door so it swung shut behind him. “I was just surprised you didn’t insist on staying.”

She shrugged, not wanting to admit that she’d considered it out of foolish pride, even though it had just been for a moment or two. “I have a greater sense of self-preservation than that.”

“I…” Whatever he had been about to say was lost when his voice trailed off, his eyes locked on the back of a neighboring building. Molly followed his gaze to a door that was cracked open just an inch or two. Turning her head, she exchanged a speaking look with John, and they both moved quietly toward the barely open door.

“You armed?” he asked so quietly that she could barely hear him.

“Depends how you define arms.” Slipping her Taser from her pants pocket, she held it at her side. “You?”

“No gun.” His gaze stayed fixed on the dark gap between the door and the frame as they moved closer to the building. “I do have arms, though.”

She was pretty sure he flexed, although her attention, like his, was focused on the slightly open door. A touch of amusement ran through her, but it was quickly swallowed by apprehension. Who knew what kind of danger hid in the shadows of the warehouse?

When they were just a few feet from the door, Molly reached her free hand toward the edge, intending to push it open, but there was suddenly a huge man in her way. With a glare at the broad back in front of her, blocking her way and even her view of the entry, she dodged around him, giving him a sharp elbow in the side. Even if he was just trying to be chivalrous, it was still a ridiculous thing to do.

Easing the door open, she took a cautious step inside, grateful for John’s watchful presence at her back. The murky ambient light illuminated the interior just enough to see shadows and forms. Dust and the lingering hint of old chemicals prickled her nose. Before she could take a second step, a darting movement caught her attention. Molly sucked in a startled breath and spun to face the threat, her entire focus was on who—or what—was in the dark space with them. Before she could race after whoever it was, the world behind them lit up, whiting out her vision. She didn’t have time to think or plan or even duck before a ferocious boom sounded, so loud that she felt it through her entire body.

John! her brain screamed, even as she knew it was too late to help him. The explosion had already sent her flying forward, weightless, from the force of the blast.