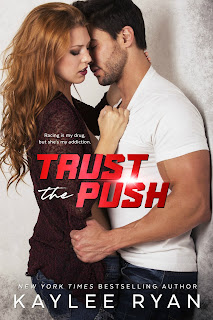 Trust the Push is a standalone romance from Kaylee Ryan featuring a twenty-five-year-old race car driver named Blaine Bishop and a twenty-three-year-old massage therapist named Aubree Chance. Having Knoxville Health Partners as its top sponsor affords the Bishop Racing team the opportunity to call in a favor when one of their drivers suffers a minor back injury. Aubree is sent to help alleviate his pain but she draws the ire of Blaine who just happens to be the two-time and defending champion on the circuit. When a deal is struck and Aubree is assigned as the team's resident massage therapist, it should have been a win-win for both KHP and Bishop Racing. However, Blaine makes it clear the last thing he wants is to have Aubree around, but his reason is Blaine can't afford to be distracted, and Aubree is definitely a distraction. And as attracted as Aubree may be to Blaine, she doesn't want to lose her job, but crossing that invisible line is becoming less a possibility and more an inevitability. Will either of these two learn to trust the push?

Okay, I'll say it: Blaine was a major jerk for a lot of the book. The guy blew hot and cold, and I understood that he wanted to remain focused on going for that third straight championship, but that certainly didn't give him permission to act as much of a jackass as he did towards Aubree. Did he make up for his bad behavior? Of course he did, but seriously, the guy had an ego and too many people were excusing his ill treatment of Aubree instead of actively calling him out on it, except maybe for Rick, who also happened to have a sorta-maybe-kinda thing for Aubree but nothing major like lovey-dovey feelings. The story itself provided for a good read, and I was entertained for the duration of the book. I felt like Aburee over-reacted a wee bit when the "twist" was revealed, but I got why she was upset and couldn't comprehend why Blaine simply allay her worries with a simple phone call or discussion. It's called communication, people! But conflict is a necessary evil in any story, so there you have it. Overall, Trust the Push was a four-starred read. ♥