Review: Advice From a Jilted Bride by Piper Rayne (The Baileys #2) 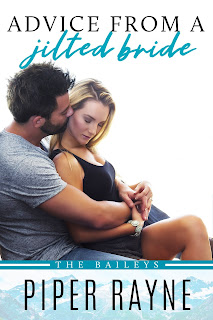 Is it too early for me to name this my favorite Piper Rayne series? Because I may be only two novels in but The Baileys have me smitten with every single member of their brood--including Grandma Dori aka G'ma D--and falling for each story that's been released so far. Advice From the Jilted Bride is book two and it's about the third eldest Bailey sibling, twenty-six-year-old Brooke, who is summarily left at the altar by her runaway groom via text message. Finding out later on that he was cheating on her, makes things even worse. With her heart battered and bruised, all she wants is to get back to some semblance of normalcy in her life in Starlight Falls, Alaska, but then her new neighbor moves in and she finds a bossy friend in Wyatt Moore, who happens to be hot and mysterious.

The thing is, Wyatt isn't necessarily who he says he is. You see, his last name isn't actually Moore--it's Whitmore, as in Whitmore Hotels, the same corporation that's bought Glacier Point Resort, which is the same place where Brooke works as part of housekeeping. He's there to learn the ropes and prove to his overbearing father that he knows how to put the place back in the black and then return to New York and be rewarded with the hotel chain he's been promised. He never planned on being drawn to the jilted bride living next door or to feel at home in the quaint little town and its close-knit community. He also never thought he'd be welcomed by the beloved family that is the Baileys. His life is in the city, so why is he even considering pursuing something with one Brooke Bailey?

I may have been a tad wary of Wyatt throughout the first quarter of this book, but then that city slicker side of him slowly but surely melted away and I got to see a side of him that was caring and sensitive. I liked that Wyatt and Brooke started off as friends, even with the underlying attraction that they may have had towards each other, before they developed as lovers. Both main characters developed quite nicely, with Brooke becoming more assertive and outspoken and Wyatt more introspective and romantic. As always, the rest of the Bailey clan made their presence felt, and as much as the eight other siblings along with Austin's Holly and G'ma D were busybodies, they did it out of love and protectiveness. Piper Rayne has another five-star winner with Advice From a Jilted Bride. ♥