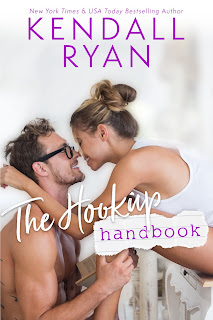 I'm an escort. A certified manwhore. And Sienna deserves a lot better than that.

Kendall Ryan's books have, more often than not, easy for me to fall in like with. I've fallen in love with a few, but, if I'm being honest here, it's been a while since I went all giddy and had a perma-smile while reading one of her stories. And then The Hookup Handbook came along and the story of the CEO of an escort business writing a manual of sorts to help those in need of successfully hooking up falling for a no-nonsense sort of girl just out of college simply had me--hook(up), line, and sinker. It's now become one of my all-time favorite from this author, and it has me hopeful that we have not seen the last from this series.

When Case Smith entered the world of escorting, he never dreamed he'd be able to make it into the successful enterprise it is today. Now twenty-nine, Case is the CEO of his own company and has been tapped by a major publisher to write a book about sex and intimacy, he jumped right on it. The thing is, he's been having difficulty as of late, not just with the writing of the book but with his primary source of income: his penis. Who'd have thought help for both of those issues would come in the form of a former ballet dancer turned recent college graduate working just for the summer named Sienna Johnson. And did I forget to mention that Sienna just happens to be his best friend--and fellow escort--Ryder's younger sister?

I'd been curious about Case ever since he made his first appearance in Boyfriend for Hire, and I loved getting to know him even better here. Kendall Ryan gave him depth and made him more than some hot guy who served as a paid companion for woman and then went on to make a business out of it. Ryan gave him the perfect counterpart and partner in Sienna, who was someone who was finding her footing but already had a pretty good sense of who she was and just needed a push in the right direction. Case and Sienna had entertaining banter and flirting, but they also had the sort of connection that went beyond their compatibility in the bedroom. From start to finish, I was engaged, and by the end of the book, they had endeared themselves to me. Dare I hope for Ryder's book soon? Five-plus stars for The Hookup Handbook. ♥