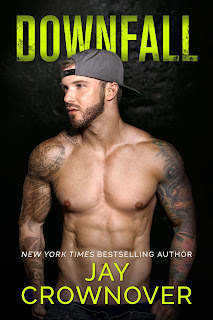 Originally released in parts through her newsletter, bestselling author Jay Crownover has published Downfall as a full-length novel. If you're like me and you've already read the story because you're a newsletter subscriber, you know that this is worth the re-read. If this is your first go at the story, don't worry, it's a standalone. There are certain supporting characters from Crownover's The Point series, but she writes this in a way that you don't necessarily need any prior knowledge or information but your curiosity may very well be piqued. It's basically a win-win. This is also not overly long--I was able to finish it in about two-and-a-half hours--but still time well spent.

Solomon Sanders already has a lot on his plate. Aside from his job as a mechanic in a chop shop and studying online for his certification to go legit, Solo spends his spare time working out and preparing for upcoming fights in order to not just keep a roof over his head but to have the money to make sure his mother has the best possible care. Saving single mother Orley Vincent and her young daughter Noble from a neighborhood bully was instinct, but now, he can't seem to stay away from them. Three things are clear: Orley's got a secret, she doesn't belong in their neighborhood, and she would do anything for Noble. Soon, Solo comes to his own discovery: he's fallen completely in love with the mother and daughter but how prepared is he to take down the foe threatening them?

There's a reason why Jay Crownover is a go-to author for me; the woman seemingly has no fear when it comes to weaving these stories that delve into issues that may bring about despair interspersed with romance that reminds you that the truest kind of love is the one worth fighting for. There's a uniqueness to her main characters as well, each of them with some amount of baggage yet striving to overcome whatever's thrown their way. I loved being able to experience Solo, Orley, and Noble's love story once again, and the fact that I read everything in one go eradicated the whole lack of patience thing that led to bouts of frustration as I awaited new chapters when Crownover still had this in her newsletter. Solo and Orley were a one-of-a-kind couple with an extraordinarily gritty yet inspiring love story. If you've never read this author's work before, start with this one. Downfall gets five stars. ♥