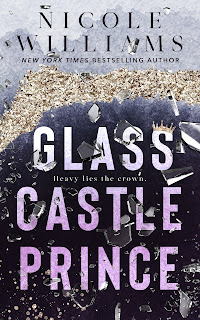 I'll be honest, it's been a while since I last read a Nicole Williams book that I absolutely adored. I loved my first few reads from her--although I have yet to read the much earlier ones which made her the notable author she is now--but her more recent ones were hit or miss with me. And then a prince came along and swept me off my feet... By "prince" I mean His Royal Highness the Prince of Norland, Prince Edward, whose story unfolds in Williams's new standalone release, Glass Castle Prince, and which he shares with Charlotte Everly, university student and daughter of the former groundskeeper of Valmont Manor, a royal residence.

When twenty-year-old Charlotte Everly decides to take a year off university in order to come to a firmer decision with regards to her studies, returning to Valmont to become the off-season house manager seemed like a good idea. The last thing she expected was for Prince Edward to make an appearance along with his three closest friends. Whacking the twenty-two-year-old future King of Norland with a skillet may have been bit of an overkill, but Charlotte more than made her mark on the prince. Who would have thought blackmailing and an arrangement involving kisses and sex would lead to a royal romance that naysayers believed was more suited as tabloid fodder with no guarantee of a fairy tale-like happy ending?

Without giving too much away, let me just say that it would be best to reserve judgment on Edward until all those layers of his are peeled back. There's seriously so much more to him than meets the eye, and getting to know him was, hands down, my favorite thing about this book. Coming a close second had to be Edward's close-knit circle of friends who may have initially seemed like a trio of troublemakers but turned out to be rather perceptive and supportive guys. On the other hand, Charlotte, who may have been a wee bit more naive than she would have liked to admit, had a backbone of sorts, although she did have a bad habit of running from her problems rather than confronting them. There was a lot about the book that surprised me, making for a far more enchanting read than I was expecting. Glass Castle Prince had me swooning and falling in love with a royal romance quite nicely indeed. Kudos to Nicole Williams. 4.5 stars. ♥