Review: Should've Been Us by Jess Bryant (Fate, Texas #4) 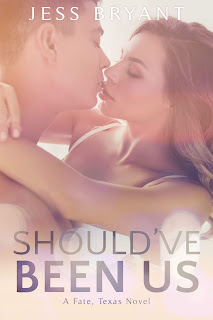 Should've Been Us is part of the Fate, Texas series and my second read from Jess Bryant, the first one being Stay a Little Longer, which also belongs to the same series and which I originally thought was the first in said series, but more on that later. This is the story of Lulu Nichols and how she gets over the one guy she's been in love with forever. When she agrees to be the "best woman" at her best friend's wedding, Lulu knew standing by Derek Harper's side should be an honor, and it was, but it was also torturous considering she would have preferred standing across from him exchanging vows of forever instead. She knows it's time for her to move forward, that Derek will never love her in a romantic sense, that his heart already belongs to his bride-to-be. Being paired up with Connor Shaw for the all the pre-wedding and wedding festivities, however, was not what she had in mind but maybe going toe-to-toe with him will be enough of a distraction. The thing is, Connor isn't looking to be just a distraction for Lulu; he wants to be hers forever.

Remember I mentioned this being part of a series and how I thought my first Jess Bryant read was the series starter? Well, it wasn't until I was reading this new book that I suspected I was missing something--the "something" being two previous books in the series (yup, books that came out BEFORE the one I though was the first one) plus crossover characters from another author's series. I know that this is promoted as a series of standalones, but yeah, there's a reason why the books are all part of ONE series, and well, I did feel a wee bit lost at times. That being said, I did love Connor, who I must say was the best thing about the book. He loved Lulu unconditionally, and to be honest, the guy deserved an award for how devoted he was to her. Lulu, on the other hand, well, I ended up calling her Cuckoo Lulu. While I'd consider Connor's feelings for her devotion, Lulu's for Derek was more delusional. But again, Connor was what made Should've Been Us worth reading. It gets 3.5 stars and may be checking out the first two Fate, Texas books. ♥

Purchase Should've Been Us on Amazon | Apple Books | B&N | Kobo.