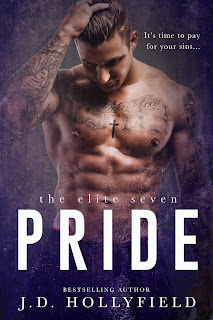 The cliffhanger ending in Ker Dukey’s Lust had me anxious to get my hands on the second The Elite Seven book, the multi-authored series about a set of seven young men who are initiated into a secret group called The Elite. Book two is the story of the alpha among the seven, eighteen-year-old Mason Blackwell, but he isn’t exactly like those who are part of his new brotherhood. Mason and his younger sister Evelyn grew up in foster care, but it was their last placement with the Griffins that truly had their lives spiraling out of their control and into that of an evil individual who uses Evie as their means in order to get Mason in line. Just like the others in the group, Mason will have to fulfill one particular task with his target being twenty-three-year-old Theology professor, Megan Thorne. Things become far more complicated than Mason ever thought possible, but will he sacrifice his and Evie’s freedom for the woman he’s falling for?

Pride was one of those reads that made me wish I could jump into the story and do some seriously bad things to one of the characters, i.e. the villain. Is it possible to hate someone THIS much?! I mean, argh, I so wanted to hurt them for what they were doing to not just Mason and his sister but to a whole host of other characters. I can’t get into the whos and the whys haven’t been fully divulged, but I’m now rather invested in seeing this series through given that the lives of the seven guys and their significant others are entwined. This book isn’t my first J.D. Hollyfield read, but it was definitely a surprise given that it was her 2 Lovers series, which was co-written with K. Webster, that I had previously read and those were romantic comedies. Clearly, Hollyfield does well in the romantic suspense genre, too, packing Mason and Megan’s story with loads of both romance and suspense. Pride gets 4.5 stars and has me excited for the next one. ♥