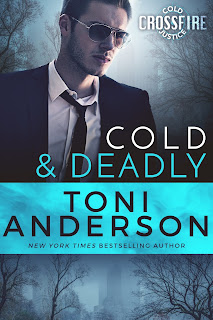 As long as his heart wasn't involved, as long as he kept the most vital part of himself separate, so that if and when she left him, he wouldn't be completely destroyed. Maybe, just maybe, they could make this work.

Welp, I finally got around to reading a Toni Anderson-penned novel this weekend. I've seen her books on Goodreads and on e-retailers, and I do remember getting the first Cold Justice because it was free four years. Alas, I have yet to read it but after reading Cold & Deadly, the first in Anderson's spin-off series, Cold Justice: Crossfire, I'm going to doing a whole lot of catching up before the second book is released, although no publication date has been announced that I know of. This author's writing is the kind I crave, with a pulse-pounding story, engaging main characters, and a true-blue mystery that'll keep armchair sleuths like me on their toes perfectly meshed with a charged romance that'll satisfy many a romance aficionado. This may have only been my first read from Anderson, but with writing as on-point as hers, there was simply no way I was not going to read her other books!

I try to keep all my reviews as free of potential spoilers as possible, more so when it comes to those that have elements of mystery and suspense to them. Here, I'm going to give the most basic information about the book just so people have a better idea of what it's potentially about. On the day thirty-five-year-old Supervisory Special Agent Dominic Sheridan was saying goodbye to his mentor, he comes across the man's most recent protégé, twenty-six-year-old Special Agent Ava Kanas. While the death of the man they both looked up to was ruled a suicide, Ava suspects he was murdered. When another FBI agent is gunned down and both Dominic and Ava are nearly killed as well, Dominic begins to wonder if Ava's suspicions may have been right all along. As these two headstrong federal agents work together to gather evidence and decipher clues, they'll need to keep their wits about them, not only to stay one step ahead of the killer, but in order to not cross a line they desperately want to.

I was so into this series starter that by the time I was done, my tablet was down to just three percent! I usually check every so often how much battery I still have left on my gadgets when I take breaks using them. However, there weren't any breaks will reading this fantastic romantic suspense novel, to the point that I hadn't realized that I'd missed calls and messages the two to three hours I'd spent reading. From the romance to the suspense, the tension was palpable. Toni Anderson put together a novel that had an intriguing mystery--to the point that I didn't figure who the serial killer was until they were RIGHT THERE--and a cast of characters that had depth. I seriously loved Dominic's and Ava's respective back stories because they weren't these cookie-cutter FBI agents who went into it for the usual ho-hum reasons. There was this push and pull between this multi-layered, complex twosome I couldn't get enough of. I'm now curious about the original Cold Justice series (I shall FINALLY be reading the first book and bought a book set or three) and can't wait for book two in this spin-off. Five-plus stars for Cold & Deadly! ♥